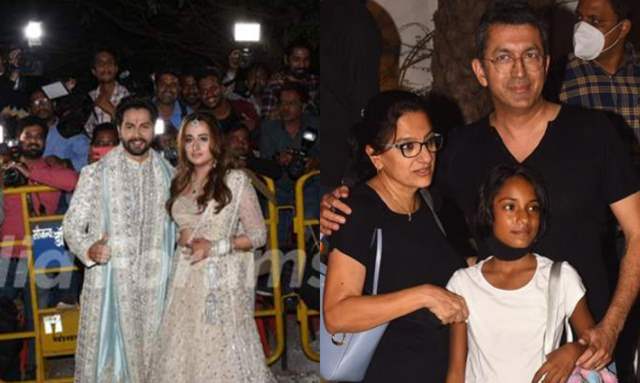 Childhood sweethearts Varun Dhawan and Natasha Dalal got hitched in a private affair at The Mansion Resort in Alibaug on Sunday, January 24. The couple exchanged their nuptial vows in the presence of their loved ones and very few industry friends which included Karim Morani’s daughter Zoa Morani, Kunal Kohli, Karan Johar, Manish Malhotra etc.

Among the few people invited, filmmaker Kunal, who also is Varun's cousin, has now opened up about the intimate wedding of the two.

In an interaction with Hindustan Times, Kunal spoke about the wedding ceremonies and shared that the idea of the wedding was to keep it among very close family and even closer friends. However, he also mentioned that there were four-five friends of Varun, whom everyone knows from school. They were sharing stories.

“Varun’s my cousin. Some people know it, some don’t. His mother and my mother are real sisters. I call her ‘Laali maasi’, he calls me ‘Kunnu bhaiyya’. We are both family. The whole idea was to just keep it to the close family and very, very close friends. There were four-five friends of his, whom everyone knows from school. We were sharing stories,” said Kunal.

“We came away becoming closer, discovering his friends and them discovering us. I always say, ‘You can’t choose your family but you can choose your friends,’ and I am glad he has chosen his friends well. Likewise for Natasha. Both of them have a wonderful set of friends. It was just like one big family and we were all happy to be together in the privacy of everything,” he said.

Kunal Kohli also thanked the media for being considerate and respecting the family's privacy by not interfering with anything. Varun and Natasha stepped out of the venue their nuptials, the newly married couple was showered with blessings and congratulatory messages from the paps. The groom even arranged food for the paps present outside the venue.

It was very nice of the media to even give us that privacy. I would step out in the morning with my daughter for a walk or something and the media would be there. We used to just chat happily and move on. Everyone respected each other’s privacy.

The wedding ceremonies began in on Friday with Varun’s bachelor party followed by their Mehendi, Haldi and sangeet ceremony. Owing to the current coronavirus situation around the globe, their nuptials saw the attendance of only 50 guests.