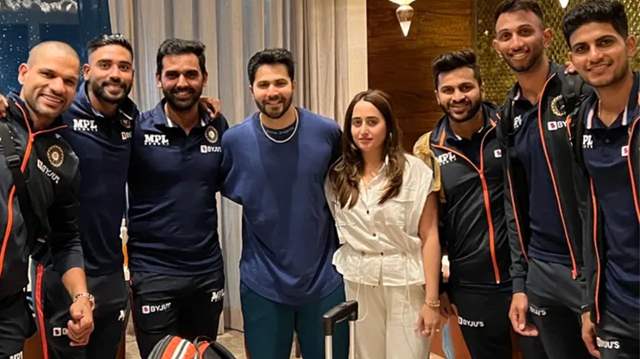 Varun Dhawan's Saturday seemed to be off to a great start when in addition to leaving for a trip with Natasha Dalal, he also just so happened to run across Indian cricketer Shikhar Dhawan.

The two top performers in their respective disciplines crossed paths, and Varun made sure to capture it in a perfect moment. Varun and Shikhar posed for a picture as they met on the airport.

Later Varun took to his Instagram handle and posted the picture. Sharing the photo with Shikhar, Varun wrote, "DHAWANS #theones." He also took to his twitter handle and shared a picture with the men in blue and Shikhar. Along with the pictures, he wrote, "At 4 in the morning I was like a boy in a candy shop. Got very excited to meet and chat with our men in blue About their upcoming tour. Also @SDhawan25 asked me a couple of riddles".

Varun was decked in his cool blue outfit while Shikhar Dhawan was sporting the Indian team's tracksuit as he was off to Zimbabwe with Team India for the next tournament.

Talking about his professional engagements, Varun was last seen in the film JugJugg Jeeyo alomgside Kiara Advani, Anil Kapoor, and Neetu Kapoor. Fans hailed Varun's performance in the film. Apart from this, he recently wrapped up the shoot of his film Bhediya wherein he will star alongside Janhvi Kapoor. The duo had been sharing loads of BTS pictures and videos from the sets while filming for Bawaal in Europe. The film is helmed by Nitesh Tiwari. Dhawan will also ne seen in Bhediya with Kriti Sanon.