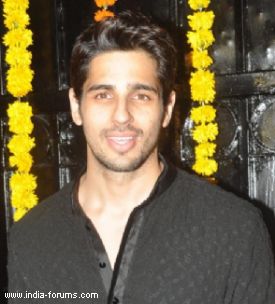 Actor Sidharth Malhotra praised the promo of Varun Dhawan's upcoming film "Main Tera Hero" and says the kind of comedy that his "Student Of the Year" co-star can do, he himself can't.

"I have seen the trailer of 'Main Tera Hero' and I even called Varun the day it came out. It is very entertaining. Varun has got a great sense of timing. I think this film is apt for the kind of sensibility he has," the 29-year-old said here Wednesday at the launch of the "Hasee Toh Phasee" mobile app.

"I can't do the kind of comedy he is doing, it is amazing. His genre is unique. I wish him best of luck and I think it will be a fun film," he added.

At the trailer launch of "Main Tera Hero" a few days back, Varun had praised the trailer of Sidharth's second film "Hasee Toh Phasee" and said he is still friends with the actor.

On the other hand, "Main Tera Hero" has been directed by Varun's father David Dhawan and stars Ileana D'Cruz and Nargis Fakhri as the female leads.

Bigg Boss 14: Teaser Promo of Nikki Tamboli is Out
-5 seconds ago

Neha Mehta aka Anjali Wanted To Return To 'Taarak Mehta..' ...
33 minutes ago

Star Plus' Ghum Hai Kisi ke Pyaar Mein To Go To Nashik For ...
38 minutes ago