View Profile
This Friday, watch your favorite singing sensations celebrate Valentine's Day on an exciting episode of Idea Dhoom Macha De! Get set to watch all the celebrity singers perform on songs which have been directed, composed or picturized on the three celebrity judges – Shankar Mahadevan, Sharmila Tagore and Prasoon Joshi! So tune in to this special two-hour episode to witness some romantic performances which will surely touch your hearts, this Friday, February 15th at 8:30 pm only on NDTV Imagine. 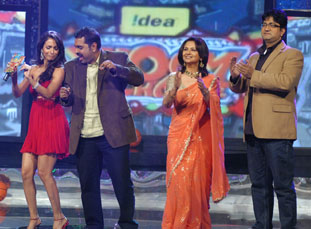 Featured Video
Watch our celebrity participants perform on a medley of songs in their own unique style, leaving the judges and audience pleasantly surprised! Jaspinder dressed up like Sharmila Tagore and dedicated her performance to her while Devang had the judges in splits with his Shammi Kapoor act, as he jived along with the dancers! Richa performed on an interesting mix of English & Hindi songs while Baba rapped for the judges! Suneeta gave a vivacious performance singing super-hit Bollywood tracks and Kamaal had the girls going weak in the knees with his melodious voice! Anaida and Sapana sang Roop Tera Mastana both in their individual style and Babul had everyone swaying as he sang some romantic tracks! All the celebrity participants gave some spectacular performances which had the audience craving for more! To add to it all, our judges Sharmila Tagore, Shankar Mahadevan and Prasoon Joshi sang together on an all time favorite number "Aasmaan Se Aaya Farishta". It is a lesser known fact that the original track was also sung by Sharmila Tagore along with Mohd. Rafi.

So, don't miss this special Valentine's Day episode of Idea Dhoom Macha De this Friday, February 15th at 8:30pm only on NDTV Imagine.