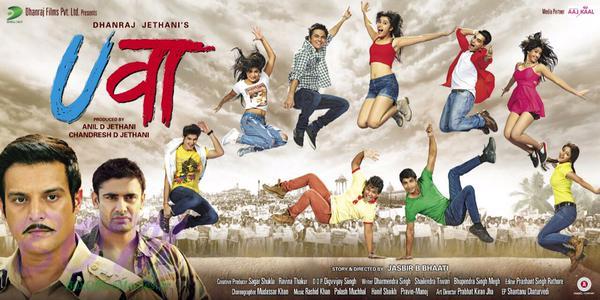 Set in Uttar Pradesh, "Uvaa", meaning youth in Hindi, is the story of five inseparable friends, Ram (Vikrant Roy), Anil (Rohan Mehra), Vikram (Lavin Gothi) Salmaan (Mohit Baghel) and Deenbandhu (Meghvrat Singh), who in their flush of youth, are notorious for wreaking havoc around them. After being expelled from their school, they are sent to an "English" public school to be reformed.

They are admonished daily by all their teachers who are fed up of their constant trouble-making. Worrying girls in the class, disrupting lessons, coming late and getting punished, is a routine for them. They are simply untameable.

But their involvement in an incident concerning a girl who has been raped, changes their equation in society. For once, they have the support of the entire school and their family in their quest for the truth.

"Uvaa" carries a message, which becomes apparent too late in the film after much screen time has been wasted watching the juvenile antics of the five boys along with the shoddy reaction of their teachers. Add to it, unwarranted, poorly choreographed song and dance sequences. The first half of the film, which is intended to be a comedy, is stressful to sit through.

The second half drags as well, but suddenly takes on the flavour of a social drama. It is a tad watchable owing to the issue it tackles, albeit in a slapdash manner.

The five young actors, most of them from the small screen, are energetic and portray decent acting skills. It is the poor writing and amateurish direction that lets them down.

Lavin Gothi, as VT aka Vikram Tyagi is noticeable with his effervescence, but mars it at times by being a Shah Rukh Khan clone. Mohit Baghel as Salmaan too stands out in his comic capers.

Om Puri is wasted as the universal Dadaji, as is Archana Puran Singh as the mother-turned lawyer, Jayashri Bhatia. Jimmy Sheirgill as SP Tejaveer Singh, looks as if he has walked out of the sets of another film where he plays a policeman (doesn't he always?), but makes up for his lack of performance throughout the film in the last scene in the courtroom drama.

Rajit Kapoor manages to look the part of the strict principal he plays, and has ample scope to perform, but fails to impress. The little that he does, comes effortlessly to an actor of his stature. Sanjay Mishra as Vyakulji, in his inimitable style tries hard to boost a poor film.

Scores of small time actors and newcomers, waste their time and that of the audience, by resorting to immature performances in the garb of acting.

With a decent production quality, the film manages to exude a fairly aesthetic look.

The background score in a few scenes creates an impact, barring which, the music, is average, with only "Vande mataram", standing out owing to the powerful lyrics.

Overall, the film is a poor attempt at driving home a relevant social message. A perfect case of good intention, bad execution. Give this one a miss.