BollyCurry is back, bringing to you a preview of the movies releasing this month! February is touted to have some interesting and high profile releases, while the others don't seem all that appealing. However, lets get to discussing what Bollywood has to offer us this month without further ado! 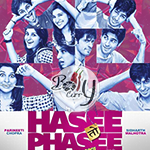 The first Friday of the month brings to us a wide variety of films. First up, we have the much awaited romantic film Hasee Toh Phasee, starring the heart-throb Sidharth Malhotra, vivacious Parineeti Chopra and the beautiful Adah Sharma. The film has been directed by Vinil Matthew and is produced by the famous Dharma Productions along with Phantom Films. The story revolves around "senti" Nikhil [Malhotra] and his impending wedding, where he meets the bride's "mental" sister Meeta [Chopra], who is a kleptomaniac and a "mad scientist". While attending to her during the celebrations, the two end up falling for each other. What happens next? Does Nikhil continue with his wedding? Or will he and Meeta decide to tie the knot? To get your answers, you'll have to hit the theaters on the 7th of February! 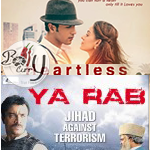 Another film releasing on the same day is the thriller Heartless, which has been greatly inspired by the Hollywood flick Awake. Directed and produced by Shekhar Suman and starring Adhyayan Suman, Om Puri and Deepti Naval, the film deals with the concept of anesthesia awareness which occurs when a person does not get enough anesthesia during an operation and remembers the events during the operation. Aditya [Suman] is suffering from a heart disease, and decides to marry his lady love a day before his operation. While on the operation table, he suffers from anesthesia awareness and proceeds to find out many disturbing things related to his marriage and surgery. What are these things? What happens next? Does Aditya survive the operation? To find out, you'll need to go check out this film! Also releasing on the 7th of February is the movie Ya Rab, starring Raju Kher and Ajaz Khan, who rose to fame with his stint in the recent reality show Bigg Boss 7. The film is based on Islam and terrorism, and the incorrect perception of Islam by the public. Surely, this sounds like an interesting watch! 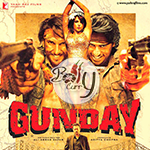 The next Friday of the month is Valentines' Day, and what better day to release one of the most anticipated film of the year? This Valentines' Day, be prepared to be transported back into the 1970s with the film Gunday! Comprising of a stellar star-cast including Priyanka Chopra, Arjun Kapoor, Ranveer Singh and Irrfan Khan and produced under the YRF Banner, this film is sure to steal everyone's hearts! The story revolves around two coal bandits and arms smugglers turned underworld dons, Bala [Kapoor] and Bikram [Singh] who are best friends. The twist in the story arrives when the two best friends fall for cabaret dancer Nandita [Chopra]. What happens next? Who does Nandita pick? Does this affect their friendship and will this result in them being apprehended by the cops? That's for the makers to know and for us to find out! 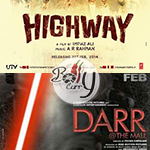 The next big movie to watch out in the following week would be the Imtiaz Ali romantic drama Highway. It boasts of a talented star-cast including Alia Bhatt and Randeep Hooda; and its music has been composed by the musical maestro AR Rahman. The film is said to be an extension of an episode Imtiaz Ali had directed fifteen years back for the critically acclaimed show, Rishtey. It revolves around the kidnapping of Veera [Bhatt] by Mahabir [Hooda] and his cronies, and the group travels by road over six states to sell Veera off into the flesh trade. During this road trip, Veera and Mahabir land up falling in love. How does this change the dynamics of the kidnapping? Does Mahabir still sell Veera? Does Veera return to her family? To know the answers to these questions and more, don't miss out on this flick! Another film releasing on the same day is Darr @ the Mall, directed by Pawan Kriplani of Ragini MMS fame. It stars Jimmy Shergill, Nushrat Bharucha and popular TV star Shraddha Kaul, and revolves around a night when a few people are stranded at a mall and strange happenings take place with them. Do these people manage to save their lives and escape the mall? Will this horror film manage to creep us out? We can only know when we watch the film on the 21st of February! 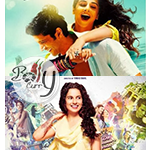 Finally, the last Friday of the month also brings to us some interesting films. First up is the sequel to the popular movie Pyaar Ke Side Effects - Shaadi Ke Side Effects, which features a talented star cast in the form of Vidya Balan Kapoor, Farhan Akhtar, Ram Kapoor, Gautami Kapoor and popular comedian Vir Das. The film is a comic take on how one's life changes after marriage and having children, and how the protagonists Sid [Akhtar] and Trisha [Balan] rediscover their love. The other film releasing on the 28th of February is the Kangana Ranaut starrer Queen. The film revolves around a simple and protected Punjabi girl Rani [Ranaut], whose marriage breaks off a mere few days before the actual date. However, she takes things in her stride and decides to go off on her honeymoon, alone. What follows next is a journey of Rani's self growth as she traverses around the beautiful locales of Amsterdam with a bunch of people she meets in the city itself.
This is all Bollywood has to offer us this month! While the entire month is full of exciting releases to satiate every movie-goer, there are also some films which don't appear to pique our interest! What do you guys think? Which films are you excited about, and which films didn't interest you? Comment below and let us know!
Author: Ritchelle C.
Editor(s): Pooja B. and Gunia M.
Graphics: Preet K.
Do you have a suggestion or comment for BollyCurry? Drop us a PM at BC_Dropbox today!
30 Likes

Nawazuddin Siddiqui Waited 20 Years to Work with Sudhir ...
7 minutes ago

Rakul Preet Singh confesses to being a part of drug chats ...
37 minutes ago