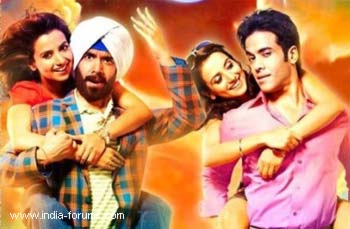 Tusshar Kapoor, who is still struggling to make a mark in Bollywood, is now following sister Ekta Kapoor's footsteps - he has turned co-producer with "Chaar Din Ki Chandni" and says it's all for money.

Tusshar told to IANS: "I have turned co-producer just for the greed for money as I am not being paid too much for the film. It's a solo and it's a huge discount for me as an actor. I agreed because I got to work with a hit director and actor. It makes the two ends meet, so I had to compensate."

Directed by Samir Karnik, "Chaar Din Ki Chandni" stars Tusshar and Kulraj Randhawa in the lead roles and it is scheduled to release March 8. Unlike investing money through his sister Ekta's banner Balaji Telefilms, Tusshar has pumped in money independently for the promotions.

"I have invested some amount in this as far as the promotions are concerned and that will be repaid once the film releases. I will have a small share in that (box office profit). It's not under any banner, it's just an agreement between me and Top Angles Productions," he added.

However, Tusshar plans to take some marketing tips from Ekta to promote the film.

He said: "If I need some ideas for promotions, I can consult her because she has some brilliant ideas. I will have a conversation with her and ask her what I should do to promote 'Chaar Din Ki Chandni'."

"She has helped me because she got the 'Pavitra Rishta' tie-up done. Hopefully, I might go in with 'Bade Achche Lagte hain', if the channel approves," the 35-year-old said.