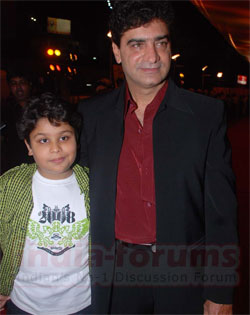 Now that "Dhamaal" is finally out and doing well at the box-office, film-maker Indra Kumar has heaved a sigh of relief. Besides taking the risk of making a film without a single heroine, he had been kept at tenterhooks with Sanjay Dutt's trial proceeding side by side with the shooting. The film's premiere saw the director sitting outside the theatre, sharing his anguish with a friend. "The movie is done, it's such a relief. It's only a miracle that all went well, otherwise when Sanjay was busy with court I was almost hopeless. He came back and the whole work got finished, it is simply god's grace," Inder was overheard saying.

Earlier, many in the industry had expressed apprehensions that the film wouldn't work without a lead actress. But Indra went ahead and has brought alive some fun-filled male bonding on screen. However, it's not the first time that he has made a movie on male bonding. "Masti" was almost a trendsetter, inspiring many other directors to make similar movies. "We all know that when guys are together they have a ball, it's more fun. Female get-togethers are bitchy most of the times. The audience love to laugh and films depicting male bonding gives them a chance to do that," Indra explains.