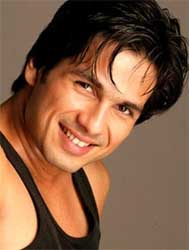 American choreographer James Martin Kudelka who has been roped in Ken Ghosh's next to instruct Shahid Kapoor with some international dance moves can't stop raving the actor for his ability to perform.

Best known for his work with high-profile pop musicians such as Justin Timberlake, Janet Jackson, Pink and boy band N'Sync, Kudelka is thoroughly impressed with Shahid's ability to pick up things fast and his interest for his work.

'Marty (as he is fondly called) thinks Shahid is a fantastic dancer and a fast learner. He thinks that Shahid is incredibly focused and enthusiastic about his work and one of few good dancers he has come across,' said a source from the production house.

The source added: 'He likes the fact that not only is Shahid a quick learner but also that he has left no stone unturned to get into Justin's super flexible moves. Everyone on the set was mesmerised after watching his moves. They can't stop talking about him thanks to Marty.'