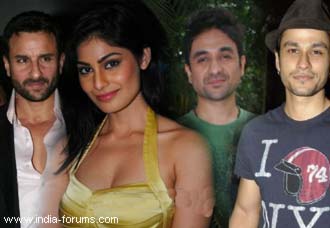 There will be Saif Ali Khan, Vir Das and Kunal Khemu, and one Puja Gupta! The one-film-old actress says she is not at all insecure about being cast with three male actors in her next film, 'Go Goa Gone'.

In her debut Bollywood vehicle 'F.A.L.T.U' as well, the former beauty queen was the only female among the boys -- Jackky Bhagnani, Ritesh Deshmukh and Arshad Warsi.

'I'm just happy with my character. And insecure? Not at all! Being again the only girl at the sets, it's just second time lucky for me! It's a lot of fun shooting with them,' Puja told IANS.

After winning the Miss India Universe crown in 2007, the 25-year-old went on to represent the country at the Miss Universe 2007 competition in Mexico. She didn't make it to the top five, but the platform opened many doors for her.

She bagged the chance to model for brands like Mari'o's Hair & Care, Pantaloons, Coca Cola, Monte Carlo, Bausch & Lomb as well as the Lay's Tango campaign with Saif.

'In the movie I play a young college girl, who is very independent and believes in herself strongly. She is a very easy going yet adventurous person and that's what brings her to Goa with her friends in the movie,' she said.

The movie is being directed by Raj Nidimoru and Krishna D.K. of 'Shor In The City' and '99' fame. Puja has already shot the first schedule of the film.

So has she had any crazy and adventurous experience so far?

'I do get to hold the real gun! We are just the first schedule down right now, and we have one more schedule to shoot. So there's much more adventurous and bizarre things coming my way. I'm absolutely thrilled about it,' she added.

So far the crew has shot at a place named Chorla Ghat, which is on the Goa-Karnataka-Maharashtra border. She says it was beautiful.

'The place is surrounded by wildlife and greenery, cottages not much civilisation, there were no phone signals and so no BBM (Blackberry Messenger)...so it was a huge deal for me,' said Puja, who admits Bollywood has always been a 'dream destination for me'.