Even a decade ago, no one could have thought of writing an annual sum-up article on the television industry, which was limited to a Doordarshan and the odd Zee TV and Star World. Not only was acting in television industry considered to be the last resort of a wannabe star, but also like an old-age home for ageing, almost-retired stars.

Today not only are reams of newsprint used to let everyone know about the goings-on in the industry, you even have television production companies listed on the bourses. The year 2007 only contributed to making the position of the television industry stronger in India. New channels were launched, senior executives were poached from competitor channels and innumerable makeovers and transformations happened.

Here's a recap of what happened in the big world of the small screen.

The Return of Reality Shows:

Featured Video
If there was one phenomenon that marked the television world in India in 2007, it was the return of the reality shows with a bang. 2006 saw a steady decline in the interest in reality shows, main reason being the winners getting lost in the crowds. Though the Big Boss drama did manage to generate some interest, it was not enough to overtake the serials.

That is what Sa Re Ga Ma Pa managed to do in 2007. So much was the interest generated in this reality show that the audience preferred watching it over Kyun Ki…a serial that has been on top of the TRP charts for the last six years! But what was different in this year's shows that helped it overcome 'epics' like Kyun Ki? Nothing - except the fact that there was an overdose of them. If Zee had Sa Re Ga Ma Pa, Star came up with Voice of India, not to forget Indian Idol from Sony, which meant, even if you wanted to watch something else, you had little option but to lend your attention to these shows. Plus, there is also no denying the fact that the quality of singing improved amongst the contestants, thereby leading to more interest.

Last, but definitely not the least, the cell phone companies and other sponsors also let loose their purse strings to ensure enough publicity and media hype over the contestants. With the Chhote Ustaads also in play now, very soon you will see parents wanting their kids to become singers akin to the craze of becoming cricketers today!

The unnatural death of serials:

Take Kulvadhu for instance. Launched amidst a lot of hype and hoopla and armed with biggies like Milind Gunanji, Kitu Gidwani, Kulvadhu was Anuj Saxena's (Maverik Productions) first television venture. But it died an unnatural death due to low TRPs. Same was the story for Rishton Ki Dor, Kabhi To Nazar Milao, Durgesh Nandini, Aisa Desh Hain Mera, Resham Dankh, Twinkle Beauty Parlour, Jeete Hain Jiske Liye – all of them launched with an army of promotional salvos, but failed when it came to standing the test of time. A weak script was the culprit in most of the cases. The Indian television audience, it seems, is tired of the run-of-the-mill family dramas and want something different.

Guess it's time television producers, like their Bollywood counterparts, need to get more creative and think out better storylines. They need to look at a Naya Office Office or Baa, Bahoo Aur Baby to hit the bulls eye.

New channels on the block:

If you thought, the traffic jam on air was limited to metropolitan airports, think again! The satellite situation is no better. And a large part of the blame can be attributed to the geometric progression at which television channels are growing.

The year 2007 saw channels like 9x, Bindaas, Zee Next and NDTV Imagine as the big ticket launches. While the general entertainment channel 9X (promoted by ex-STAR head honcho Peter Mukherjea's wife Indrani Mukherjea) is the latest kid to hit the block, all the others are specialized channels with a niche market. With so many channels aiming at various niche markets, one wonders whether the consolidation movement going on in the other industries (airlines, pharma etc) will start raising its head here as well. The year also saw many head honchos of television channels changing sides for greener prospects. Balaji creative whizkid Sandeep Sickand left Ekta Kapoor to join Sony, only to quit after few months. Sameer Nair, COO of Star TV India put in his papers to move on to greener pastures. Ditto for Peter Mukherjea, the man responsible for the stupendous success of Star channels in the subcontinent. 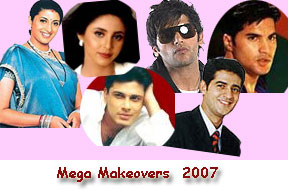 What was unimaginable for the last six years happened in 2007 – the iconic Tulsi (played by Smriti Irani) changed! After a thorough search, and equally rampant rumours, Gautami Gadgil (better known as Ram Kapoor's wife till recently) replaced Smriti, who (officially!) went on a break only to form her own production house and act in newer serials. While, Kyunki's popularity did not nose-dive, it did come down from the numero uno position it was retaining for more than half a decade.

If this was not enough, Balaji also replaced Cezanne Khan (as Anurag Basu) in its prime time serial Kasauti Zindagi Ki with Balaji loyal and Kyun Ki star Hiten Tejwani. With Hiten's popularity as Karan skyrocketing every day, acceptance in his new role was much smoother than Gautami Gadgil's. Kasauti also saw another replacement in the form of Vikas Sethi, replacing Manoj Bohra, who shot to fame with his role of Prem in the same serial.

But why suddenly so many changes in the cast? And why are people like Smriti Irani and Manoj Bohra who were comfortable in their roles and have cemented their positions opt to move ahead? Reasons vary from fights with producers to the quest for making it bigger. While Irani quit Kyunki due to a combination of both factors, Bohra quit purely because of a tiff with the producer. Ditto for Cezzanne Khan, who had infamous on and off set fights with Shweta Tiwari (Prerna).

Shows which are doing well in recent times are Chhoona Hai Aasmaan, Dill Mil Gayye, Mere Apne and ofcourse the reality shows. So what are we looking forward to in the year to come? More competition to Balaji, definitely, now that Smriti Irani's production house is providing serials to the newly-launched 9X. Also, with NDTV's foray into the entertainment world, Star and Times would be facing more competition. But whatever happens, the winner in all cases is the viewer!

those shows did have good concepts, however the production man who knows where it led to

+ 5
14 years ago wonderful article and awesome analysis...thanks for this

+ 3
14 years ago Kulvaddhu, ADHM, and JHJL did not have low TRPs, nor the script was weak...its just that sony heads don't have brain..they always pull out good shows and keep the crap shows running forever.

+ 9
14 years ago Wonderful article.Loved reading ir.U hv written various good points.This year I hope old shows will give way to new shows and there will be a new trend in the tv industry.

14 years ago I heard they are now showing some one's real life story in 'choona hai asmaan''..I think for that TRP is now raising..Everyone is interested now..