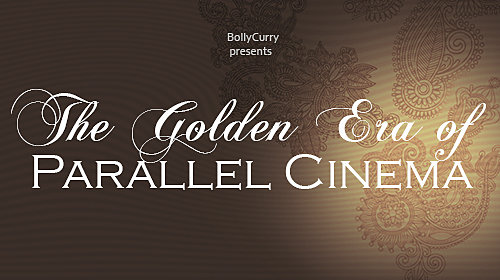 Parallel cinema, a blanket term for cinema known often for its realistic content and absence of all the glamour that drives mainstream films, originated somewhere around the 1920s and took shape between the 40s and 60s. Satyajit Ray is perhaps regarded as the pioneer of the movement but filmmakers before him had already started making movies that were hailed as milestones, the earliest being V. Shantaram's silent film Sawkari Pash (1925). In truth, the pioneer of the movement were the different state governments that provided financial support to filmmakers who sought to deliver films that were neither totally political, nor theatrical and not really "art" but somewhere in between. Let us look at the origin and the growth of the movement and some of the best movies it gave birth to. 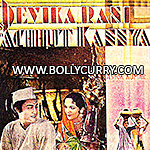 There is a scene of a dog howling near a hut in Sawkari Pash. As regular as it probably seems today, it was hailed as a breakthrough and made way for film-makers who sought to infuse a touch of "realism" in their movies. Issues of the day began to pave their way into the films. One example of such hit film is Achhut Kanya (1936). Starring Devika Rani and Ashok Kumar and directed by Franz Osten, it is the story of two friends - Pratap (Ashok Kumar) and Kasturi (Devika Rani) - in love with each other. However, there is one problem, Ashok is a Brahmin while Kasturi is an untouchable. The film highlights the caste issue in India that seeps into every aspect of social life and still exists to this date. Given the limits of technology in those days, the film remains a magnificent piece of work. 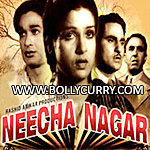 Another such example is Chetan Anand's Neecha Nagar (1946). The film is also of particular significance due to the fact that it made it to the international circuit and even won the Grand Prize at the debut Cannes Film Festival. Since then, Indian films frequently made it to all the different international film festivals. It also marked an important thread of parallel cinema - the influence of Indian literature on films. Neecha Nagar, based on a Hindi story by Hayatulla Ansari, takes a look at the difference between the rich and the poor in society. The wealthy landlord lives "high up" on the mountains while the poor toil in the valley "below". Written by Khwaja Ahmad Abbas, the film was a pioneering effort. It also marked the debut of Pandit Ravi Shankar as a music director. 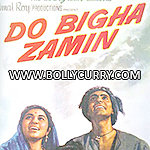 The 50s saw the growth of films that rejected the absurd musicals that dominated the industry. The era saw certain directors combining certain features of the aforementioned commercial films and elements of art-house films as well. One of the best examples is Bimal Roy's Do Bigha Zamin (1953). It achieved both critical and commercial acclaim and paved way for the cinema of 50s and 60s, a period regarded often as the "Golden Era" of Indian cinema. The story revolves around the lives of farmer Shambu (Balraj Sahni), wife Parvati (Nirupa Roy) and son Kanhaiya (Rattan Kumar) and their "do bigha zamin" in a village hit by famine. The film, is regarded as a trend-setter, was inspired by the Italian film Bicycle Thieves (1948), the same that inspired Ray's magnum opus Pather Panchali (1955). 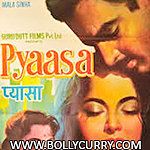 Another film of the same thread is Guru Dutt's Pyaasa (1957), a classic that among many things was featured in the list of All-Time 100 Best Movies by Time Magazine. It is the story of Vijay (Guru Dutt), a struggling poet whose work is ridiculed as waste by both publishers and relatives until he meets a kind hearted woman in Gulabo (Waheeda Rehman), a prostitute. She falls in love with him and his poetry, and helps him get his poetry published. In the end, after having seen enough of the hypocrisy and deceit around him, he leaves with Gulabo to start a new life. The film received widespread fame, has a cult following in France and Germany and has been screened in many countries over the world to outstanding success. 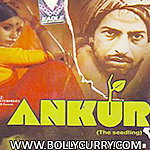 The 1960s saw the growth of "middle" cinema and reached to wider audiences in the 70s. Pioneers like Gulzar, Shyam Benegal and Saeed Akhtar Mirza accepted and embraced to great success certain elements of conventional cinema. Shyam Bengal's first feature film Ankur (1974) opened to critical acclaim and brought to the fore Shabana Azmi and Anant Nag. The movie is the story of Laxmi who lives with her deaf and mute husband, Kishtayya, until one day Surya, the son of the landlord, arrives in the village. He has an affair with Laxmi when Kishtayya leaves but throws her out when she gets pregnant. Kishtayya returns and has him publicly beaten but Laxmi rushes to his defence. She curses Surya and returns home with Kishtayya. In the final scene, a child throws a stone at Surya's glass window, signifying the "seedling" (ankur) of revolution. 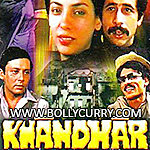 The 80s saw some films that received unprecedented international success. One such film is Mrinal Sen's Khandhar (1984). Based on a Bengali short story Telenapota Abishkar by Premendra Mitra, the story revolves around three friends who visit some ruins where a mother lives with her daughter, Jamini; she is waiting for the arrival of a cousin who will marry Jamini. One of the three friends pretends to be the suitor however, the friends leave when the mother dies, leaving Jamini alone in the ruins. The film was screened at the 1984 Cannes Film Festival. 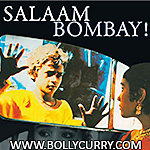 The film that became the second Indian film to be nominated for the Academy Award for Best Foreign Language Film and received outstanding acclaim from media and world over was Mira Nair's Salaam Bombay (1988). The hero of the film is Krishna who acquires the name of "Chaipau" in Bombay where he works for a travelling circus. One day, his boss asks him to run an errand but when he returns the circus is gone. He leaves for Bombay and ends up in a red light area. Nair portrays the characters with amazing sensitivity and warmth. She used hidden cameras for the film and shot it in the absence of sets, all which helped the sense of honesty be portrayed remarkably well onscreen. The film won many awards and received several nominations.

Parallel cinema saw a decline during the 1990s owing to financial constraints. However, it saw a revival again during the late 90s. Even keeping its popularity (or lack of it) aside, it is clear that it is as much of a force in the industry as commercial cinema (that brings in most of the money). It's themes, the focus on the common man and the issues depicted will always continue to have universal appeal. Moreover, due to such films insisting on using actors and not stars, it is responsible for much of the talent that graces Indian cinema.