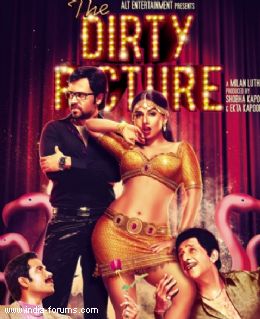 Vidya Balan's no-holds-barred performance in 'The Dirty Picture' has received an overwhelming response and has managed to gross Rs.20.32 crore at the domestic box office since its release Friday.

'The response is fantabulous. We are doing well in A, B, C centres. It's holding on, it is not a one day wonder,' Girish Johar, head of acquisition and distribution, Balaji Motion Pictures, told IANS.

'We released the film on 1766 screens, but the response is such that we are adding 30 to 40 screens. Even multiplexes are increasing the screening of the film,' he added.

An unofficial biopic of southern sex symbol Silk Smitha, 'The Dirty Picture', is described as Vidya's movie all the way and Johar says that 'this is the highest grosser for a Vidya starrer and a Emraan starrer ever.'

Always seen in graceful roles on big screen, the 32-year-old actress pulled out all the stops to fit into the shoes of a sultry siren who ruled the silver screen. Her bold attempt seems to be paying off as the cash registers are ringing.

Though critics felt that the script could have been more taut and meaty, they are raving about Vidya's uninhibited act as well as Naseer as an ageing superstar.

On day two, Saturday, the film recorded a 13 percent jump from Friday on account of strong word of mouth and exceptional response.

'The film is poised for a record creating opening weekend ahead of some of the biggest blockbuster of the recent time. It has already found place on the top 10 list,' said Johar.