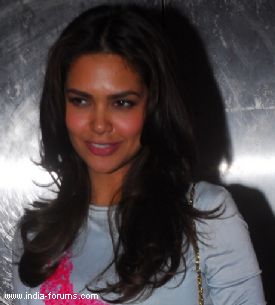 Esha Gupta, who has done an item song "Dhat tere ki" in the forthcoming film "Gori Tere Pyaar Mein", is happy that she did the song.

"'Dhat Tere Ki' has got a good response. And thank god 'dhat tere ki' happened to me because it is doing really well," the 27-year-old said here Thursday at a special screening of the film.

However, Esha is not ready to do more item songs in the near future.

"Nothing right now. I am just finishing 'Humshakals'. We will start our second schedule. After that in June, I start my next. So no item numbers for now," said Esha, who made her Bollywood debut with "Jannat 2" last year.

It is slated for a June 20 release next year.