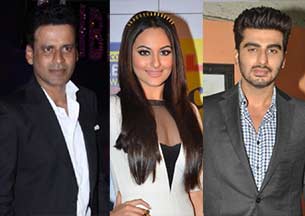 The team of "Tevar", which stars Arjun Kapoor, Sonakshi Sinha and Manoj Bajpai, has started shooting for the film here after a week-long shoot in Mathura.

In the Boney Kapoor production venture, Sonakshi is cast as a girl from Gokul in Mathura, while Arjun will be seen as an Agra guy.

According to sources, the team will shoot at various locations here for about 20 days. Choreographer Remo Dsouza, Boney's brother Sanjay and director Amit Sharma are already here and Sonakshi is expected to join them Monday.

Sanjay told mediapersons that the lanes and heritage havelis of the Taj city will feature prominently in the film, while Braj language will add a flavour to the film.