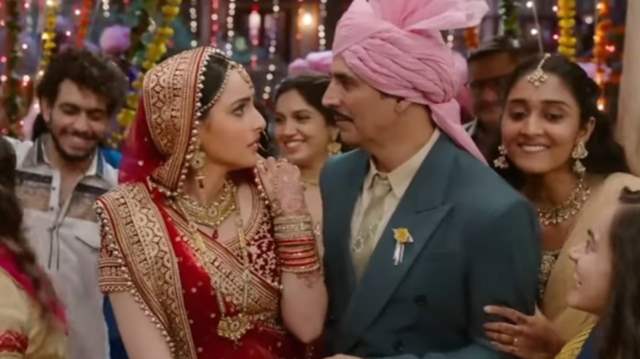 Bollywood actor Akshay Kumar, is gearing up to amuse his fans with his upcoming next family film, 'Raksha Bandhan.' There are high hopes for this film, which depicts family bonds and deep love between a brother and his sisters.

While the film will release on the significant day of Raksha Bandhan in August, the makers are leaving no stones unturned and are frequently treating netizens with the films updates on social media.

Now the makers unveiled the first song of the film Tere Saath Hoon Main and you will definitely need a tissue box nearby while listening to this emotional track.

The music of Tera Saath Hoon Main is given by Himesh Reshammiya, while it is sung by Nihal Tauro and the lyrics have been penned by Irshad Kamil. The song revolves around the unconditional love between a brother and a sister. In the song, the Atrangi Re actor is also seen getting emotional as his sister is seen getting married.

Raksha Bandhan movie is directed by Anand L Rai and is produced by the filmmaker and Alka under the Zee Studios, Colour Yellow Productions and Cape of Good Films banners. This movie has Bhumi Pednekar as the lead actress and it will be her union with Akshay after Toilet: Ek Prem Katha movie.

+ 10
1 months ago What an emotional track, had tears after listening to it.