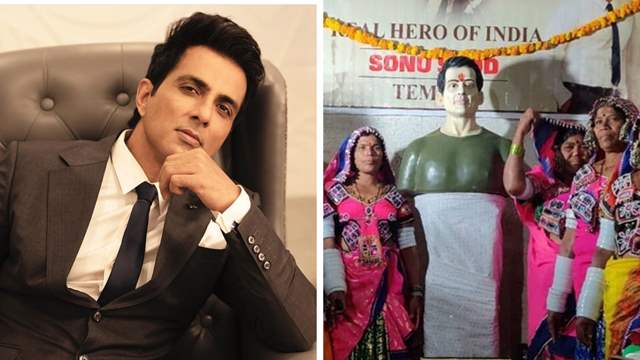 The actor who emerged as a messiah for hundreds of people during the lockdown: Sonu Sood, is receiving love from all corners of the nation.

To appreciate his philanthropic efforts amid the COVID-19 outbreak, the local people of Dubba Tanda village of Telangana district constructed a temple in his honour. The locals inaugurated the temple with an idol of Sonu Sood. An aarti was performed and women dressed in traditional attires, sang folk songs.

Giri Kondal Reddy, a Zilla Parishad member, said, “As he has attained the place of god by his good deeds, we have built a temple for Sonu Sood. He is a god for us.”

Recently, Sood Sood mortgaged his properties in Mumbai, including two shops and six flats, to raise Rs 10 crore to help the underprivileged, migrant workers and patients who suffer from serious diseases.

During the lockdown, Sonu emerged as a saviour for the migrant workers, as he helped them to travel back to their homes safely by arranging travel facilities for them.

Besides helping migrant workers, Sonu has been offering help to the needy who approach him via social media.