Some movies touch your heart. I still remember the day when I watched Tanu Weds Manu and my heart just went out to the cast, the story and the love. That experience had increased my curiosity for the sequel. Anand L Rai's Tanu Weds Manu Returns is a fun ride but turns out to be bumpy one eventually.

Here's what we liked and what we didn't in the second installment of the 2011 hit flick.

Kangana Ranaut: Undoubtedly her performance is simply mind blowing. She looks gorgeous on screen as Tanu. She plays a double role in this film for the first time, and as Kusum, Kangana is yet again at her best. Even though she is not visually appealing there is a certain charm to her as Kusum. Her dialogue delivery is impeccable especially the ones with her thick Haryanvi accent.

Deepak Dobriyal: He is the show stealer. He has an epic comic timing and his expressions do most of the work for him. He also takes up most of the punches in the movie, dialogue wise as well as literally.

Songs: One thing you can guarantee is that if not anything you would definitely want to get up and start dancing. The songs are that happening and foot tapping. Banno, Ghani Bawri and tracks were you just can't keep yourself still. Old school girl is a very unconventional track and the one with the Haryanavi accent is simply awesome.

In sync: Usually sequels in Bollywood don't really work due to its lack of connection with the 1st part. Fortunately this one doesn't pose any such problem and is completely in sync with the prequel. The 1st half is the best part of the movie. 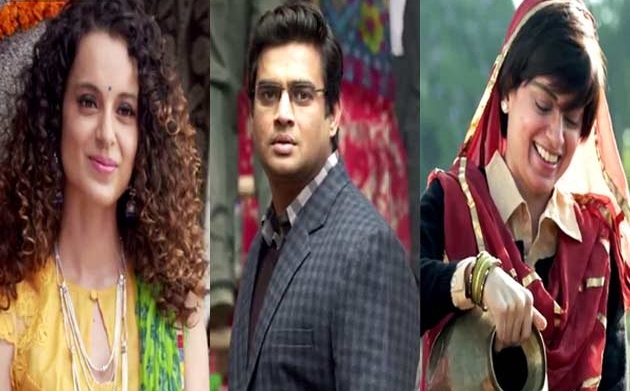 R. Madhavan: don't get me wrong here. He is undoubtedly a brilliant actor, but if one has to compare his performance the 1st part was brilliant, but he tends to fizzle away in the 2nd. Whatever said and done, the chocolate boy charm he has will never fade away.

Faulty 2nd half: As much as we love the 1st half the movie, the 2nd half takes a big time dip. The movie tends to become stretchy as well making 165 minutes a tedious task to undertake. Towards the end R. Madhavan hardly seems in love with Kangana and the climax stands out like a sore thumb.

Predictable: Something one just doesn't expect his from Anand L Rai, the movie becomes very predictable towards the climax and thus ends up looking like a spoof.

Wasted characters: Some of the pivotal characters in the 1st part are retained in the 2nd but are talent that is completely wasted. Swara Bhaskar and Eijaz Khan only add to the clutter in the movie. The bad guy Jimmy Shergill's character of Raja Awasthi could have been defined well but the story falters in doing so.

All in all, the movie is definitely worth a watch, for nothing else but some awesome hilarious moments. Anand L Rai tries to cook up a tasteful meal, but it remains half baked. But still one would look at Kangana and say, "Banno tera swagger laage saxy"

3 years ago It is interesting movie and Kangana Ranaut as always she perform amazing role in the movie.

5 years ago How can you give Tanu Weds Manu and Bombay Velvet both the same rating of 3 stars? Seriously - is there no difference in these two movies?

Tanu Weds Manu Returns is set four years after the dramatic turn of events of Tanu Weds Manu wherein the seemingly incompatible duo of Manu and Tanu had managed to get hitched, overcoming all odds. Manu and Tanu now find themselves on the brink of separation. As with all things life, the passion has subsided and it's replaced by monotony and solitude. Their marriage seems more like a burden and a formality than a symbol of mutual love and respect. Their decisions are no longer driven by love but by their own egos. And yet, whether they want to believe it or not, all is not lost. And, so, they must both suffer, for although life is a great teacher, alas, it teaches things the hard way.

Tanu Weds Manu Returns is the kind of cinema that the Indian masses crave for. It's a formula that just cannot fail in a diverse and colorful country like India. We Indians love to celebrate. The dozen or two religious festivals are just not enough. Festivities are an innate part of our lives. And marriage functions are the grandest of them all. In short, the marriages are a singularly viable business. For Bollywood, it's a bankable subject like no other. Some of the biggest commercial hits in the history of Hindi cinema revolved around the theme of marriage. While Tanu Weds Manu was a testament to the efficacy of very fabric of marriage in binding us together, Tanu Weds Manu Returns is a gentle reminder of its fallibility.

Tanu Weds Manu Returns is a non-stop entertainer from start to finish, but, in order to fully enjoy the film, one needs to be credulous enough to believe anything and everything that's on offer. The film certainly shows us the dark side of marriage but it does so without appearing too grim. In Tanu Weds Manu Returns, we witness how a free-spirited girl and her pragmatic husband fail to meet each other's expectations. How a l...

5 years ago Total waste of time.
First movie was good this is not worth spending time and money.

MaithiliK 5 years ago I still haven't had the chance to watch this movie but hearing all the amazing reviews, I'm dying to watch Kangana in Tanu Weds Manu!

+ 4
5 years ago I watched it with great enthusiasm.. almost ran for the show to reach on time.. because i am a big time fan of first part
First half was a big fun.. you will not even know and the interval would happen.. but second half was messed up.. very hoch-poch..
The story is developed well till interval.. but too much celebrations and wasting time in random marriages really dont help at all..
Manu falling for Kusum cz she is look alike of Tanu was understandable.. but then falling in love to the extent of hurting Tanu was not digestible.. and by the end i was almost cringing at him and wanted to hit him..
Movie is predictable but Manu's character is not given strength in his one.. like in the last part he stood up head high for his love.. here he was just slave to his ego and then helpless in front of his promise of word.. The man who stood against UP's goons for his love couldn't do anything here.. seeing Tanu being hurt and helpless and still he was just making constipated faces and nothing more.. i was very disappointed at the butchering of character in the second half..

The most heartbreaking fact was Jimmy Shergil.. even when he was a villain in part 1, he was a strong one.. and i fell for him.. he was my favourite character in the movie.. he lost Tanu to Manu but he too lost with head high.. he was here in this movie.. in all his suave but not given enough screen space.. not allowed to react except for 1 or 2 scenes.. the man who was crazy enough to shoot at a moment's notice just acted puppet who had lost all his anger.. every scene i expected an outburst from him.. every time.. but nothing except for staring at Tanu's face..

It was all in all about Kangana Ranaut.. and i loved her to the core.. if u loved her in Queen.. you can worship her here.. She was brilliant and flawless as Tanu.. she was flwaless as Kusum.. They both totally seem two dufferent people..
Enjoyed every bit of her.. from first to last scen...

+ 3
5 years ago so wanna watch this movie...osm trailer...full entertainment...
kangana just nailed it

+ 2
5 years ago Thanks for the review! :)
Will probably watch for sheer fun. Lol