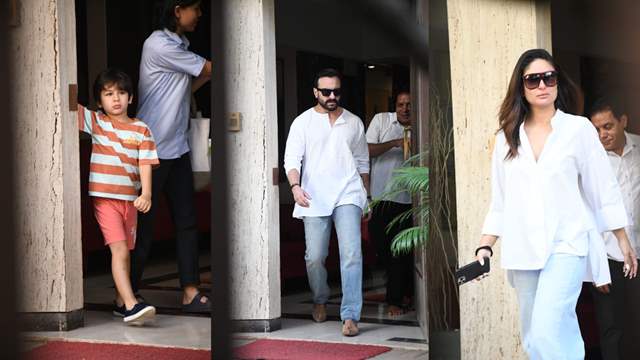 Kareena Kapoor Khan always attracts attention when she leaves her home. The actress appeared to be having a good morning, as she was spotted with her entire family earlier. Bebo wore a casual ensemble and posed alongside husband Saif Ali Khan, while Taimur Ali Khan and Jehangir Ali Khan appeared to be having a good time. However, there was another thing that drew our attention: Tim requesting that the paparazzi cease their photography.

Kareena Kapoor Khan is seen wearing a white shirt with light blue bell-bottom jeans in the photographs. She wore black sunglasses and her hair was left unstyled. Saif Ali Khan also appeared in a white kurta paired with blue denim and sunglasses. Jehangir Ali Khan appeared to be enjoying himself as he sat in his small car and played with his nanny. On the other hand, Taimur was in a good mood and said to the paparazzi snapping him, 'band karo.'

Meanwhile, Kareena Kapoor Khan will next be seen in Aamir Khan's Laal Singh Chaddha. The film has been rescheduled twice and is now scheduled to arrive in theatres in August. After all, this is an official Hindi remake of the Tom Hanks-starring Hollywood film Forrest Gump. The South sensation Naga Chaitanya will also play a significant role in Laal Singh Chaddha.

+ 3
1 months ago Taimur is so cute, asking for media to stop taking pictures.