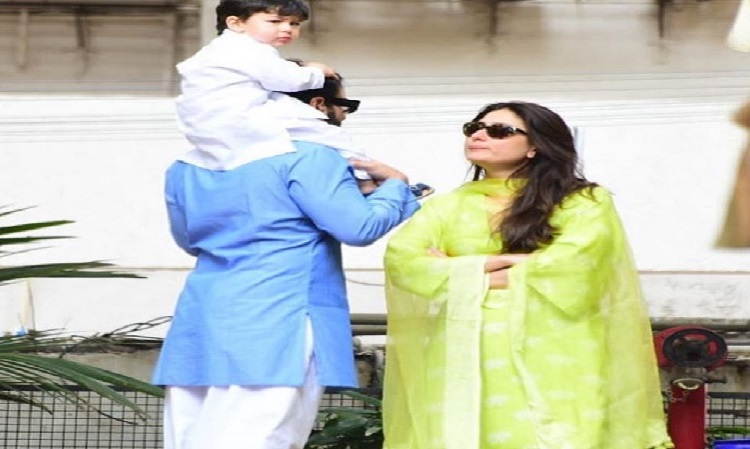 Taimur Ali Khan is the most popular Starkid of Bollywood. The little one has a huge fan base and is the favourite of paparazzi.
Taimur's pictures go viral over the web within no time and the toddler has been winning everyone's heart with his overload of cuteness.
While both Kareena Kapoor Khan and Saif Ali Khan have spoken about Taimur in the past and given many details about their son and his habits, the latest piece of information revealed by Saif just makes Taimur sound all the more adorable.
In an interview with a magazine (as reported by Pinkviklla), Saif Ali Khan revealed how Taimur has reacted to his changing looks over the last couple of years.
The actor insists that the toddler doesn't give a reaction to his changing looks, even when he was sporting dreadlocks and a beard playing a Naga sadhu in his upcoming film but doesn't like it when his mother Kareena Kapoor Khan, wears makeup.

"It doesn't seem to bother him. He also came to set when I was playing a Naga sadhu for Navdeep Singh and I had the dreadlocks and the beard... but nothing. I think he doesn't like to see his mother wearing make up, but he doesn't seem to care so much in my case," Saif Ali Khan said.
Meanwhile, Saif is busy shooting for the second season of Sacred Games. While Kareena has started shooting for the film Good News which also stars Akshay Kumar, Diljit Dosanjh and Kiara Advani.
Stay tuned for more updates.
0 Likes

shwetadesh 1 years ago All boys are the same! They hate the make ups on
Mom. Mine does too. Even a simple eyeliner bothers my baby even now.

Promo Review: 'The Gone Game' Might Just Be a Gamechanger in ...
51 minutes ago