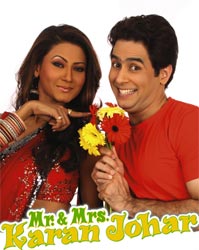 Nirav Parekh of Main Course Productions and International Institute of Event Management brings to you yet another exciting Hindi play with a unique title too - Mr. & Mrs. Karan Johar that will have you in splits of laughter!!


Main Course Production along with the star cast of the play is all set to announce his forthcoming play 'Mr. & Mrs. Karan Johar' which is to premiere at  Rangsharda, Bandra, Mumbai  on 7th December'08.


The story line with lots of twists and turns enacted by a host of talented actors like Aman Yatan Verma, Delnaaz Paul, Nigaar Khan, Kiku ,Feroz Mevawala,Badrul and Richa Singh, setting the tone and mood of the play, this one will surely live up to the interesting title it has. The play touches upon the everyday themes like fidelity, hoodwinking the system, a neighbor who messes up things even more etc.


On this occasion, Nirav Parekh founder and director of main course production says," "Our Confidence, Passion, Integrity, and Experience are the integral part of our organization which has helped us to carve a niche. For the past 5 years, we have well managed to perform 500 shows across the globe. Mr. & Mrs. Karan Johar being an innovative concept and our tenth production promises to entertain the audience to the fullest". 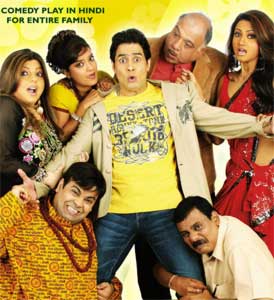 but somehow Mrs. Johar (Khushbu Johar) always doubts her husband's fidelity. This reaches the crescendo when one night Karan does not turn up home at all and reaches home early morning. To add fuel to fire Khushbu finds a diamond necklace in Karan's coat pocket, Karan's savior (or he thinks he is) his next-door neighbour Harry, who at every step in the interrogation, lands Karan exasperated: till Karan finds himself landing from the frying pan into the fire.


To make things worse Chandani of Chandani Bar comes on the scene to take back her diamond necklace but by this time Khushbu has already left Karan and gone to her mother's house with the necklace in her possession.


Chandani tells Karan that this necklace is not hers but belongs to sharp shooter Shetty who had given it to her for that particular outing.


Bang! Start with a cat and mouse race first to find the necklace second to make Khushbu realize that her necklace is not hers. Last but not the least, to hood wing the insurance company surveyor that Karan was badly hurt in a bus accident. So one lie after another reaches Karan helpless and audience in splits of laughter.