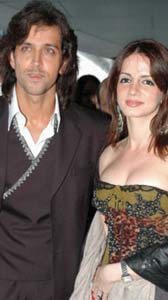 Featured Video
robbed in Italy. The ill-fated occurrence happened at the Milan airport around 3pm. Sussane and her mother Zarine Khan were going to embark a departure to Mumbai after their vacation.


The tragedy extended when Zarine revealed that her handbag was astrayed. The bag enclosed a few valuables, credit cards, and most the most essential thing that they needed was Suzanne and Zarine's passports. Therefore, Suzanne and her mother were left high and dry in Milan.


Suzanne and Zarine instantaneously notified the airport establishment about the burglary and tried their preeminent to position the crook at the airport but it was an unsuccessful endeavour.


When the two informed their families about the tribulation, the Khans and Roshans rapidly pulled a few strings from Mumbai so that Suzanne and Zarine would have to experience no trouble if doable. They started with sending photocopies of their passports by emailed to Sussanne. Subsequently, Suzanne and Zarine went the Indian Embassy who gave them fresh passports. They then checked into the same hotel where they had been staying before as they couldn't get a flight immediately.


To confirm the story, Suzanne's sister stated that it did happen and it was very unlucky. She also confirmed that her sister and mother were doing well.