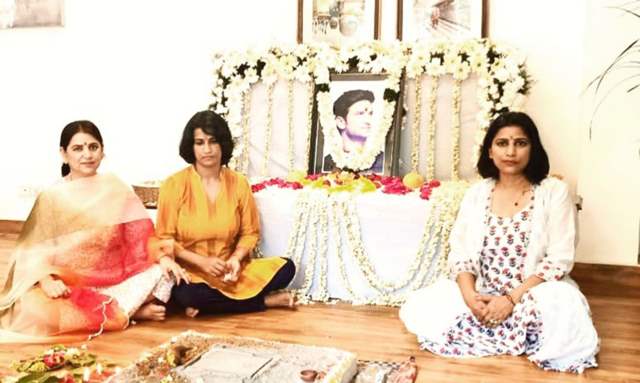 Sushant Singh Rajput’s untimely demise left his family, friends and followers in shock. On the occasion of his first death anniversary, several Bollywood actors have posted pictures with the late actor and remembered with heartfelt posts.

Now, the late actor’s sister Meetu Singh has shared pictures from the havan that was held to mark his first death anniversary. Taking to her social media handle, she penned a long and emotional note for her beloved brother Sushant, who passed away on June 14 last year at his Bandra residence. However, his death is currently being probed by the CBI and NCB.

The pictures featured Meetu sitting with her other two sisters, Priyanka and Rani. In another photo, they can be seen performing rituals and remembering their brother. Along with the pictures, Meetu wrote,

“My Pride, our Pride, Since the past few days grave despair has been brooding in the back of my mind. Last year’s fateful event took all of us by such shock that I have failed to fall back into the normality of everyday life. Many have brutally used you and the majority of them are still doing so. Manipulation is masked by love, selfish motives are hidden behind concern. If only you had people around you who had genuinely cared for you, things would have been so different. I bore the desperation of wanting you back everyday, today the misery was so strong that if the laws that bound us ceased to be, I would have mould your being out of my emotions. I would have given you my existence.”

The Narcotics Control Bureau stepped into the case after Rhea Chakraborty's phone revealed WhatsApp chats involving the buying of drugs for the actor. This stirred a whirlwind of accusations and inquiry, allegedly forming a wider inquiry into the link between Bollywood and drugs. Many A-list actors and celebrities were also questioned.

Sushant’s former flatmate Siddharth Pithani was recently sent to 14-day judicial custody in connection with the drugs case. According to ANI, Siddharth's role in the drug came to light during the investigation by the central agency.