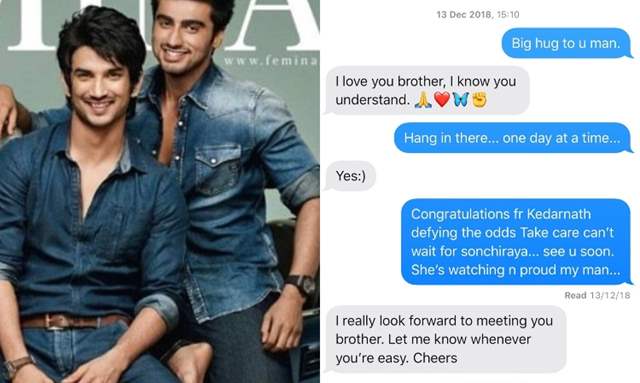 Bollywood actor Sushant Singh Rajput left for heavenly abode after his body was found hanging at his Bandra residence on June 14. The 34-year-old actor left too soon and his friends and family cannot believe that Sushant committed suicide and took his own life.

Sushant was suffering from depression from the last six months and the police also found antidepressant pills from his house in Mumbai. The actor’s family is in utter shock and Sushant’s maternal uncle from Patna is of the opinion that the actor has been murdered.

Also Read: ‘Sushant Singh Rajput Has Been Murdered, There is Conspiracy Behind His Death’ says Sushant’s Maternal Uncle

The entire industry, his colleagues, family, friends and fans are heartbroken over Sushant’s shocking demise and are pouring in their heartfelt wishes. Actor Arjun Kapoor took to social media to recall his last chat with Sushant Singh Rajput and shared that he felt the pain of Sushant missing his mother.

Sharing a picture of his chat with Sushant, dated back to 2018, Arjun mentioned: “8 months ago... My last msg to him was when he posted about his mom a week after the release of Kedarnath. He was missing her I assume while the movie was being celebrated.”

Arjun penned “I didn’t know him well enough though our paths crossed at yrf, events & screenings every now & then. I can’t say I understood what made him make this choice. I can say I felt the pain he did about losing his bearings & feeling that void of his mother.”

Now that Sushant is no more with us, Arjun added: “I hope ur in a better & happier space my friend. I hope u have found ur peace. We will all wonder & try & make sense of what happened today.”

Arjun concluded with a strong message as he wrote “I just hope & pray that when the circus settles down we as a society in due course realise ur choice wasn’t driven by one singular moment or thing but a culmination of so much that defines a human being not just by the profession u were in. Rest my dear brother Sushant you are now I hope at peace.”

Meanwhile, Sushant Singh Rajput’s funeral will take place on June 15 2020, Monday in Mumbai. Yesterday, the actor’s sister Nitu Singh had rushed to the hospital, and his father arrived in Mumbai from Patna for the funeral. However, the actor’s sister Shweta Singh Kirti will be flying from the US and will reach Mumbai on June 16 2020.

review
Review Shriya Pilgaonkar and Iqbal Khan steal the show away in the ...
-16 seconds ago

Neil Bhatt talks about prepping up for Ghum Hai Kisikey ...
-16 seconds ago