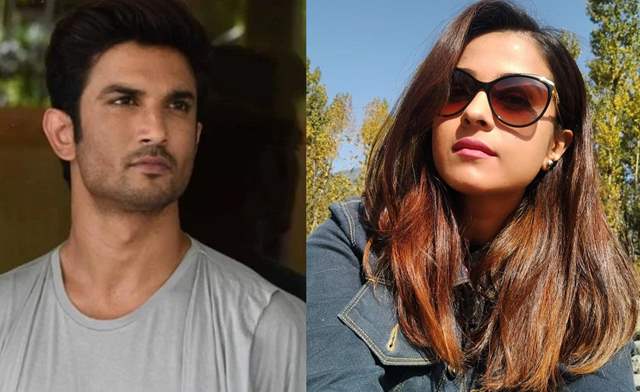 Sushant Singh Rajput's ex-manager, Disha Salian who died an unnatural death by falling off a high-rise in Malad, Mumbai, while partying with her friends a week before the actor's demise, has been unnecessarily dragged into unwanted controversies for a long time now.

Disha Salian was a celebrity manager and had managed works of actor Sushant Singh Rajput and Varun Sharma in the past. News of her sudden death on June 9, 2020, came as a big shocker for the industry and her near and dear ones. Early reports suggested that Disha committed suicide by jumping off the 14th floor of her friend's building situated in Malad.

However, later a report in Mumbai Mirror suggested that she didn't jump but fell off from the building while drinking with her friends over a dinner party.

Also Read: 'She was Drunk, She Fell Down, Didn't Commit Suicide': Inspector Reveals the Truth about Sushant's Ex-Manager, Disha's Suicide

As the news of her demise made it to the internet, Sushant Singh Rajput took to his Instagram account to mourn her death. Calling it a devastating news, the MS Dhoni actor took to his social media and expressed his grief and extended condolences to her family and friends. On his Insta stories, he wrote, "It's such a devastating news. My deepest condolences to Disha's family and friends. May your soul rest in peace."

But, little did anyone know, there came another shocking devastating news about Sushant ending his life within a week. While both the families, the Rajputs and the Salians were mourning the loss of their precious gems, various news stories defaming Disha and claiming she was pregnant with Sooraj Pancholi's baby started making rounds in the town. Further, Sooraj cleared his stance by saying he never met Disha and heard about her only in the news.

Now, Disha's family has released an official statement requesting everyone to let their daughter rest in peace and not spread rumors about her. They have also called all the reports false and baseless and termed them conspiracy theories. Their plea for their late daughter's is heart-breaking.

"Dear all, Whoever is reading this, you may or may not be knowing us and Disha in person. But we all have one thing in common. We all are humans and have the ability to feel. Thus we hope you all under-stand our pain. We lost someone we loved.

The loss is too deep and grave to be processed. It's a difficult situation for us as we are still trying to come to terms with her demise. But at the same time, what's more upset-ting are the several unnecessary rumours, conspiracy theories and speculations that are not just fake but are also hampering the well being of her parents and close ones.

While we continue to grieve our loss, we have only one request to everyone. Kindly help us heal by not encouraging, entertaining or spreading the fake rumours and news circulating around on social media by people who clearly have turned insensitive and are trying to take advantage of someone's death for their own vested interests.

Disha was someone's daughter, someone's sister and someone's friend. You all have someone who is fulfilling these roles in your lives. Look at them and tell us, how would you be feeling if same would be happening to your dear ones. Empathy is the basic quality that makes us human. So let's be human first. Please let her Rest in Peace and let's spread kindness. 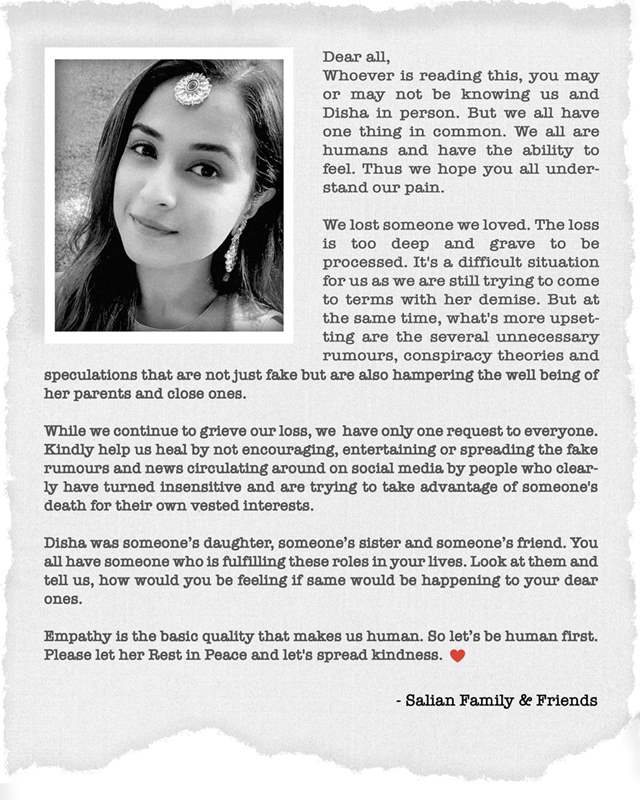 Sushant Confronted Rhea in November after Realizing She was Playing ...

exclusive
Exclusive Mohit Malhotra talks about reuniting with Hina Khan, if ...
42 minutes ago