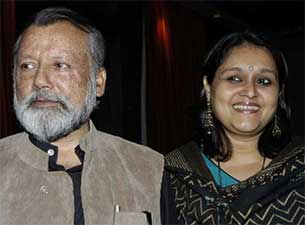 Think Supriya Pathak and you think of monstrous talent and pedigree. The actress says her two children with Pankaj Kapur are now gearing up for a career in filmdom.

"My daughter Sanaah is 23. She has studied acting at the prestigious Lee Strasberg Theatre and Film Institute. She is gearing up for a career in acting. My son Ruhaan is 20. He is a trained chef. But he's going abroad to learn acting and direction," said Supriya.

Daughter to female theatre stalwart Dina Pathak, Supriya has in her spouse the incredibly gifted Pankaj Kapur. Supriya's sister is the enormously talented Ratna Shah and brother-in-law is the indomitable Naseeruddin Shah. That's quite a family tree.

"I never thought of it that way," laughs Supriya. Her rare screen appearance in a very powerful role in Sanjay Leela Bhansali's "Goliyon Ki Raasleela Ram-Leela", has fetched her rave reviews.

"I guess we've all been doing what we believed in," said Supriya, whose two children are also set for a film career.

Supriya, who started her career with a supporting role in Shyam Benegal's "Kalyug(1980)" in 1981, has largely been cast in sweet angelic roles. For the first time in Bhansali's "...Ram-Leela", she was seen as a dark sinister character .

"When he offered me the role, the first thing I asked Sanjayji was how he thought of me in such a role. But he told me he had always seen something very evil in my eyes. I didn't argue with that," she said.

The actress says she did the film "because of Sanjay Leela Bhansali".

"I had my apprehensions about carrying off the role. But when Sanjayji narrated the script to me, I was completely swept away. Though it is something far removed from what I'm generally seen doing, it is a challenge I gladly took up to go beyond my comfort zone," she added.

She loved filming the Deepika Padukone and Ranveer Singh-starrer as "it didn't feel like work at all".

"We were all in the mood for celebration. Otherwise, as you can see I don't accept too much work. Rather, I don't get the kind of work for which I'd like to leave my home to the care of domestic help.

"Though the children are now grown up, I still like to be around for them and my husband unless there is a proper and valid incentive to go out and work," she said.

Next up, Supriya would also be seen in Danis Tonovic's "White Lies". Supriya plays Vidya Balan's mother in "Bobby Jasoos".

"The over-selectiveness that you have noticed in my career is not something I've wished for my career. It just happened. I didn't feel the need to work that much. Sometimes you do something and it doesn't come out the way you think it would.

"That happened with a television serial that I did recently called 'Chhanchhan'. But no complaints. God has been very kind."