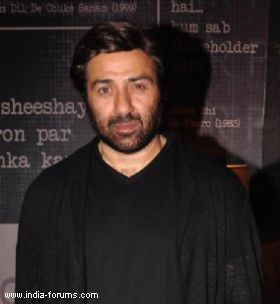 Actor-producer Sunny Deol, who has decided to direct the much awaited film "Ghayal Returns", says he is completely focussed on the project, and other films can wait for the moment.

"I will be directing 'Ghayal Returns'. I can't say anything other than that because that is the only film I am doing right now. My complete focus is on this film and everything else will happen only after this film," Sunny said here.

"Ghayal Returns" is a sequel to the 1990 film "Ghayal", featuring Sunny with Meenakshi Sheshadri and Raj Babbar.

Asked if he plans to take a break from acting after his son Karan makes his debut, he said: "(As an actor) I will never take a backseat. I am here to work and I will always be working."

Meanwhile, the actor is busy promoting his film "Dishkiyaoon", in which he plays a Haryanvi character.

"I did this film because this character is very interesting I have never spoken Haryanvi earlier. and it was different. I enjoyed it," said the son of veteran actor Dharmendra.