Sunny Deol and Rahul Rawail have a connection that goes all the way back to the year of 1983. When Sunny was ready to make his entrance into Bollywood, Dharmendra had asked Rahul himself to launch his son, and the film turned out to be the blockbuster hit of the time, Betaab. 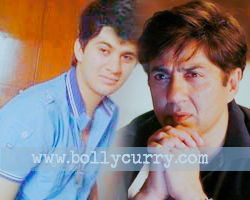 Now, back to present day, it is now the time that Sunny's own 19 year old son is ready to begin attending acting school. Just recently, Karan Deol, Sunny's son, enrolled into Rahul Rawail's acting school. In fact, this is going to be the first Indian branch of the famous Stella Adler Studio of Acting.
The school in New York is well known by all as it is named after the acting teacher of Marlon Brando. Through that school, many famous Hollywood actors have found success, such as Anthony Quinn, Warren Beatty and Candice Bergen.
Rahul is very proud to have achieved this fanchise in Stella Adler Studio of Acting, and along with that, he is even proud to have Sunny's son as his first student.
Are we going to see history repeat itself here and see another star from the Deol family in the future?