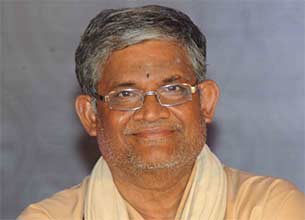 Sunil Varma is known as one of the popular Telugu comedians, who is currently enjoying the status of a lead actor. But actor-filmmaker Tanikella Bharani, who has roped him in his upcoming Telugu period-drama "Bhaktha Kannappa", feels he will do total justice to the title role.

"Sunil is no more a comedian. I mean he can still make audiences laugh but he has evolved as an actor over the years. He has the potential that he can use to play any role with ease. I'm confident that he will do justice to the role of Kannappa in my film," Bharani told IANS.

Bharani, who has started working on the pre-production of the film, will revisit classics on the same story.

"There have been a few films on Kannappa already. I will be revisiting them and see if I can learn from them. I also intend to read some literature on the character and see if it can help me with my development of the character," he said.

"It will be an out-and-out period-drama set against the backdrop of 14th century. We plan to start shooting soon," added Bharani.