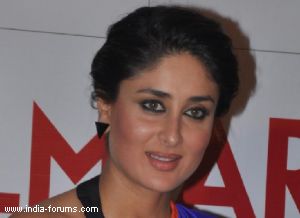 Actress Kareena Kapoor, who is rumoured to have been roped in to play writer Amrita Pritam in a biopic on legendary Urdu poet Sahir Ludhianvi, says she is still reading the script of the project.

The film is reportedly based on the romance between Ludhianvi and Pritam. Ludhianvi's role is said to have been taken on by Farhan Akhtar.

"I have got the script of this film and I am still reading it. I have liked it so far, so let's see," Kareena told IANS.

Produced by Ashi Dua, the film will be directed by Jasmeet Reen.

Sushant’s sister Shweta Singh Kriti shares a video of a fan ...
2 minutes ago

Parth Samthaan: Kasautii Zindagii Kay has shaped me as an ...
38 minutes ago