Sanjay Leela Bhansali presented the story of 'Devdas', for the third time in the history of cinema, with Shah Rukh Khan in the lead role. Cut to the present, and Bhansali is all set to release his movie, 'Saawariya' on the same day as Shah Rukh's 'Om Shanti Om'. Bhansali does not believe it is a collision, just a co-incidence.

There is a reason why Bhansali is launching fresh faces. 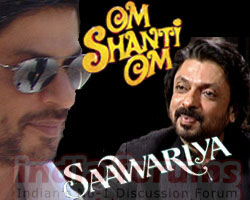 Featured Video
According to him, "I think the audience is tired and fed up of the 40-year-old hero. They want to see fresh, young faces. And that is why I am presenting to movie-goers, the chance to see new faces. How long do you think women will swoon over 40-year-old heroes?"

We think he is talking about Shah Rukh Khan, Salman Khan and Aamir Khan. Intentional or not, this statement is more relevant for SRK, since Salman has stood by Bhansali during bad times, and is a friend. Bhansali will not send out sarcastic remarks for Salman. Aamir and Bhansali have never had anything to do with each other, and, anyway, the director never comments on people who are going through a bad phase – Aamir is facing personal problems because of his brother Faisal. We think Bhansali is being a little insecure about the SRK release on the same day as his movie. Also, the much-hyped SRK-Deepika pair may get more popular than his Ranvir-Sonam pair.

Ironically, Bhansali has stated that he believes in competition, because that inspires you and makes you work harder. If he is mocking Shah Rukh, then it is not a big deal. All is fair in love and war.