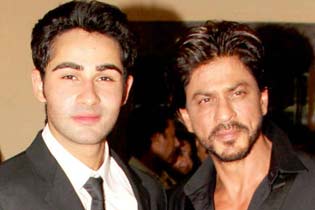 Armaan Jain is the latest star kid to join Bollywood and superstar Shah Rukh Khan has showered him with blessings for his debut film "Lekar Hum Deewana Dil" that hit the screens Friday.

Armaan is the grandson of late filmmaker Raj Kapoor.

"Wish my lil baby Armaan Jain & his team of Lekar Hum Deewana Dil a happy first step into the world of Cinema. May the film fulfill all dreams," Shah Rukh tweeted.

King Khan also complimented the 23-year-old a while back when the movie's trailer come out. He said that "my little football partner (Armaan) looks gorgeous in the film" in May.

The cousin of actor Ranbir Kapoor also received kind words from filmmaker Karan Johar, whom he assisted in "My Name Is Khan".

"Armaan and Deeksha are sparkling, assured and extremely loveable in #LekarHumDeewanaDil...watch it for its burst of young energy!!!" Karan tweeted.