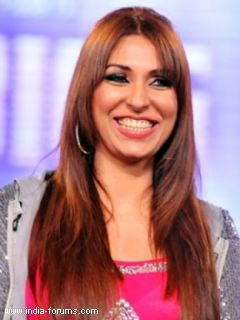 Pooja Missra is undoubtedly the talk of the town after she decided to keep a press conference to reveal the dark secrets of the Bigg Boss House. The bold and daring ex-contestant of the show, who later entered as the Hindi translator for  Andrew Symonds, exited the house earlier this week.

Her issues with Sky have been evident from the episodes and today she reveals something about him.

Pooja explains, "I used to take medication inside the house and one night I was completely tired and dozed off under the heavy medication. In the morning I was shocked to see a love bite on my body. I was so angry and nervous going around asking who did that to me. Even the production team was not ready to give me an answer."

When asked about who could have done it, the ex-contestant answers, "Siddharth (Siddharth Bhardwaj) is a kid and Amar (Amar Upadhyay) is a married man, thus the last remaining person is Sky (Akashdeep Saigal). It must have been Sky."

Mahek Chahal and Salman Khan relation was also a talk inside the house and here is what Pooja has to say about it, "I do not know if Mahek is Salman's girl, but she is behind Salman."

With Pooja coming out in the open and explaining the insider news, let us wait and watch how the heat spreads after today's media interaction.

Salman… are you listening?

Mishh007 8 years ago pooja misssraaa, just come out of
such dreams nd face the reality...

i don't think anyone has got such a bad taste that he will give love bite to YOOOUUU!!

sanw 8 years ago no takers for this probably. rather atleast I dont buy it!!

Shru77 8 years ago Love bite to Pooja Mishra?????
Who has such a bad taste??
I hope insects

MasoomaBukhari 8 years ago lol... she's such a scene creator.. but i find her funny... :p

HashiBoo 8 years ago Ohhh...Salman pls listen an pls fund this woman to take her medicine from foundation and the reporter of the article.. They both need some medical treatment

Wen will U spare US miss.misssrrraaa?!

Richie-Rich 8 years ago Lovebite? What crap!!
I wonder if anyone would be disgusting enough to do that TO YOU!!

chandnisahar 8 years ago The best quotation that suits on pooja mishra is"Angoor khtay hain".she is out of BB only bcoz of her voilant behaviour and now she is blaming BB.spare me pooja mishra and spare all.

Aditya Chopra Pens a Heartfelt Note on '50 years of Yash Raj ...
18 hours ago