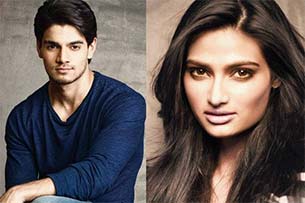 The crew of Nikhil Advani's "Hero" is in Manali to shoot some scenes with Suraj Pancholi and a couple of romantic duets with the actor and his co-star Athiya Shetty.

The romantic songs to be filmed on the debutant couple would be original tunes composed by Sachin-Jigar. The team left for Manali Thursday.

"Initially, Nikhil planned to use a remixed version of the original romantic duet from Subhash Ghai 'Hero'... 'Tu mera janu hai tu mera dilbar hai'. But with music company Saregama charging through the roof for the original songs, Nikhil Advani has opted to get fresh songs recorded," said a source.

The new romantic duet that would be shot in Himachal took some time to be composed.

"Sooraj will do bare-backed action scenes shot at a very high altitude. The idea is to make the action sequences top-notch since the word is that Jackie Shroff's son Tiger, in his debut film 'Hero-Panti' has done some of the finest stunts ever in a Hindi film.

"Sooraj's forte is drama and emotions. Stunts don't come as naturally to him as they do to Tiger. Sooraj has been practising hard to master the stunts. The 'Hero' team has devised some intricate shirtless action for Sooraj in the rugged rocky Himalayan terrain," the source said.

Athiya Shetty wishes to ‘See the world get Rid of all Troubles and ...