After playing numerous negative characters right from Surili in Banoo Main Teri Dulhann to Kajal of Kumkum to Nikki of Ek Thi Rajkumari, Soni Singh enters Teen Bahuraniyaan. The Telly Buzz team caught up with the actress to know more. 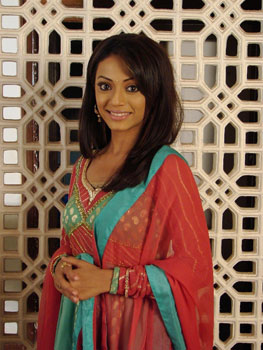 Featured Video
Soni Singh steps into Manjeet’s shoes as she becomes the third bahu in Teen Bahuraniyaan. Giving an insight on how she enters the Gheewala Parivaar, Soni says, “I play a very simple girl named Kajal. The Gheewalas call the girl and her family home as marriage talks of Kajal and Mahesh is on. But Mahesh, played by Prashant Chawla abuses them and throws them out of the house. But eventually the marriage does happen. Later, Kajal slowly changes her colours and gets negative.” And what is the motive behind the negative shade of the character, we ask? Soni quips, “I haven’t got the narration of that part as yet. So I really don’t have any idea.”

The talented belle is doing Ek Thi Rajkumari on Zee Next, where she plays Nikki, a spoilt brat from . Soni will also be seen in Viacom’s new show, Manjali Bahu where she plays the other woman in Sanjeet Bedi’s life. Speaking about her character Soni says, “Sanjeet and Shweta Tiwari portray a married couple, and I enter as his secretary. I slowly fall in love with him, and we start having an affair. I then become the General Manager of the company. I am not a girl who cries because the person is married. I just want my share of time with him and that makes me happy.”

Teen Bahuraniyaan also has Shubhavi and Roopa Dwiteya entering in the show as Soni’s aunt and mother who are trying to get her married to Mahesh.

+ 2
14 years ago oh my god what a news..thankso much TB but why u didn't ask anything abt shakira to her. it was mostly required

+ 3
14 years ago shes real pretty! if you guys want to see how she acts, do wacth the episode where she dies in KumKum, wonderful acting :)

aw tho i miss manjeet!

14 years ago So even TB is not spared from the usual negativity? Great going...wonder how different the show can get!!! Whole TB concept is not dissolved in the air!

thanks for the article.

@ammmu - the character of Mahesh is played by Prashant Chawla not Ranyal :)

And a negative bahu?? Errrmmm... and Mahesh is going to be played by Prashant Ranyal? Hmmm :)

Im a bit sceptical.. but let's see. thanks for the article!

+ 5
14 years ago oh i thought she'll remain positive...... but i wonder why she becomes negative...mayb jealousy or something... who knows what the storyline will develop into

+ 8
14 years ago Kajal turns evil later on but the question is why.

Thanks for the loevly article.

+ 7
14 years ago How can this Be? :O
Negative? The Bahuraniyaans are not suppose to be negative, whats going on? =(