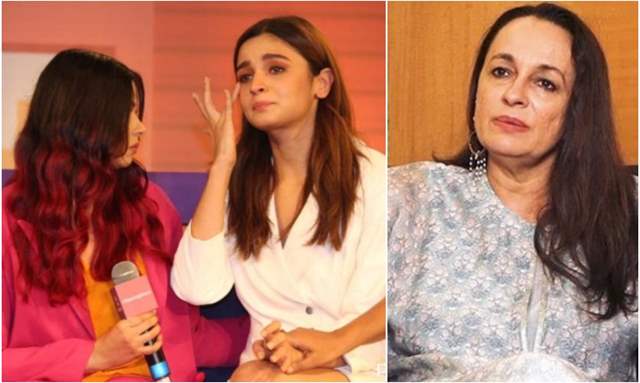 Alia Bhatt’s sister Shaheen Bhatt took to social media to expose the abusive threats and hate messages she and her sister Alia have been receiving on Instagram. Shaheen shared a series of screenshots and called out the trolls and also stated that she will report any person who sends her inappropriate messages on social media. "I will use all legal recourse available to me to take action," she wrote.

"So, I speak now to those of you who think it's okay to send me or anyone messages full of hate: If you send me a message with the sole hope (I say hope because I promise you -nothing you say is keeping me up at night) of humiliating, insulting, or bullying me, then the following things will happen - The messages or comments will first be blocked and reported to Instagram directly. - You will forfeit the right to your privacy. I will not protect your identity," read an excerpt from Shaheen's post.

Now, Alia and Shaheen’s mother Soni Razdan has reacted to the screenshots shared by her daughter. Sharing one of the excerpts from Shaheen’s post,  Razdan called out Instagram in a hard-hitting note and wrote:

“@instagram,  I do hope you’re reading this and taking some note of it. Because it really gets to the root of the issue. So easy na to let the abusers off the hook. To let yourself off the hook. To let the onus fall on the abused to take action to protect themselves. It’s basically and fundamentally ALL WRONG. And it’s high time it was stopped at the source itself. And the stinking abusers get their just desserts. Social media has for too long now become the most antisocial media mainly because those running the platforms are not doing enough to prevent abuse. #enoughisenough #stoponlineabuse #stoptheharrassment #stopabuseagainstwomen”

“I completely agree. @instagram needs to have a good,hard look at their policies. The trolls who spew venom in the name of others need to be brought to book. Why should I disallow comments and block people who are respectful and kind even in their criticism or disagreement? Abusive behaviour needs to be nipped in the bud. We shouldn’t have to change the way we live our lives.”

Alia Bhatt’s Mother Soni Razdan Hits Back at the Ones ‘Ranting’ about ...

Tede_naina 1 months ago Your daughter was getting abused since time immemorial but you are calling out now because her privilege is being called out. Your dumb husband diagnosed people with schizophrenia and you claim people inherit mental disease must say you have accomplished mission of diverting the attention

CINTAA ties up with Zindagi Helpline for combating suicides, ...
35 minutes ago

Sushant Singh Rajput Revealing about the Moment he Got Very ...
35 minutes ago