BollyCurry is all about Bollywood, which is why it is impossible for us to stay untouched from the infectious spree of emotions that Bollywood provides. This month, as BollyCurry celebrates the roller-coaster ride of every emotion, we bring to you a few of those songs which have highlighted the sentiment of rivalry; they not only keep up the sportsmanship but also pushe people towards their best. 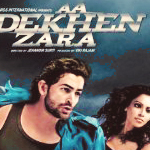 The first song that fills up one's mind when it comes to competing is "Aa Dekhen Zara". Originally from the movie Rocky [1981], the song features Sanjay Dutt and Reena Roy grooving against Tina Munim and Shakti Kapoor in a dance competition. Sung in the beautiful voices of the musical maestros Kishore Kumar and Lata Mangeshkar, the song livens up every cell in the body, forcing the feet to tap of their own accord. It is one of the most commonly heard songs in the finale of many reality television shows and such was its success that the track was remixed in the 2009 Neil Nitin Mukesh starrer, of the same title as the song.
"Hum Kisi Se Kam Nahin" 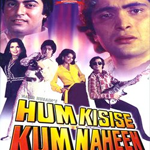 Next up on the list is another evergreen tune that is stuck in our minds - the title song of the 1977 film Hum Kisi Se Kam Nahin. In the form of a qawali, it was a big retro hit in the vocals of the legendary Mohammad Rafi and Asha Bhosle. During the song, Rishi Kapoor is seen encouraging his ladylove Zeenat Amaan to break free from the shackles of restriction placed by the society and her father. He announces his love for her by calling out loud in front of all and expects her reciprocate his love in a similar manner.
"Sailaru Sailare" 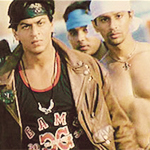 With the movie Josh (2000) built on the founding stone of rivalry, it would be odd not to have a song that depicts the same feeling. The song "Sailaru Sailare" is beautifully picturised on the streets of old Goa, with the two rival gangs challenging and taunting each other. While Mano and Suresh Peters left no stone unturned in making their voices bring out the emotion, Shah Rukh Khan and Sharad Kapoor along with the other actors, portrayed the truth behind the a real gang.
"Chale Chalo" 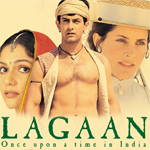 Songs don't always just speak of rivalry; sometimes they thrust a team towards struggle, so as to achieve victory over their rivals. One such inspiring song is "Chale Chalo" from the Oscar nominated and critically acclaimed film Lagaan (2001). The vocals have been lent by the God of music, A.R. Rahman and the very talented Srinivas. Through the song, Aamir Khan helps his fellow players believe in themselves and in the power of their unity in order to win the match.
"Thug Le" 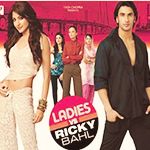 After a series of solemn songs, the list comes to an end with a fun song that gets you grooving right away. The song "Thug Le" from the 2011 release Ladies vs Ricky Bahl talks about the inherent rivalry in every human being right from their birth; that of girls versus boys. The song features the effervescent Ranveer Singh and beautiful Anushka Sharma along with Parineeti Chopra, Dipannita Sharma and Aditi Sharma. Vishal Dadlani and Shweta Pandit have lent their voices for the song; and such is its popularity, that it is still played at clubs and parties!
These are just a few selected songs among the huge collection of lyrics and tunes of Bollywood that celebrate rivalry and inspiration for victory and peace. Rack your brains a little for the songs you think can be added to this list and leave your comments below. Keep reading this space for more on the festivity of emotions.
Writer: Pooja B.
Editors: Ritchelle C. and Sonia R.
Graphics: Komal P.
Do you have a suggestion or comment for BollyCurry? Drop us a PM at BC_Dropbox today.