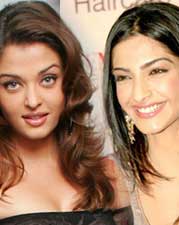 Well, well, well, Sonam Kapoor and Aishwariya Rai Bachchan are creating ripples again!  Recently, it was reported that the two gorgeous ladies have finally reached to a peaceful end of their 'fights,' and both are making an effort of getting along with each other.  Our lovely Masakali and the ethereal beauty were spotted nicely conversing with each other at Karan Johar's birthday bash last month.

However, now Sonam has given Aishwarya another reason to be angry. Sonam expressed her views about Aishwarya by refering to her as Aish Aunty ji . The reason is because Aishwarya has worked with her dad in several movies. Apparently, that's how she refers to Aish amidst chatting with her friends.

Sonam's previous comment stating that Aish is part of an older generation was a cause of bitter feelings between the two actors, and the battle got stretched to the red carpet at Cannes.  This time, Sonam has been way more blunt and actually called the beauty queen Aunty!

We don't know how Aish is going to receive this, but if Sonam not considering her a part of her young generation angered Aish, we can only imagine how much more trouble this comment is going to create!

Now do we advice Aish to take it with a pinch of salt!
Featured Video