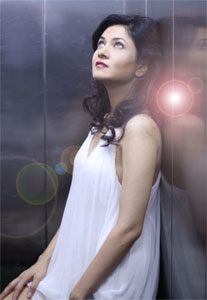 Sonal Sehgal, will soon be seen as a heartbroken wife in Ishan Trivedi's Radio.

Says our source, "During the shooting of the song 'Piya jaise lado', Sonal was told to lay an extra plate on the table for her love interest in the film, Himesh, who is actually not there. In the story, he is supposed to have left her. But she is so much in love with her husband that she forgets this small fact."

Apparently this was a pleasant surprise for Sonal for they follow a quirky family tradition similar to that.&nbsp; Says Sonal, "This was such a deja vu for me! When the director Ishan Trivedi, narrated the sequence to me, it reminded me of my childhood. As a child, my mother had allocated the duty of laying the table to me. For years I would place four plates, for my mom, dad, sister and myself to set the table. It became such a habit that even after my sister got married, and moved out, I would end up laying four plates…just in case she dropped by to eat with us. It was like repeating the same scene for a film scene."

We hope this helped Sonal get an extra-edge to perform her scene!