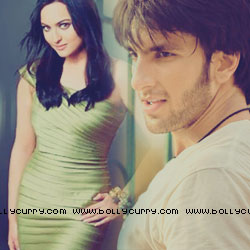 a Baaraat' and 'Dabangg', respectively, are eager to work with each other.

Sonakshi bagged multiple awards this year for her role opposite Salman Khan in the blockbuster movie 'Dabangg', while Ranveer impressed as a Delhi-boy in romantic comedy 'Band Baaja Baaraat'.

'I would love to work with Sonakshi. She is a brilliant performer and I hope we work together soon. Although nothing is fixed as of now,' Ranveer told reporters here.

Sonakshi has big projects in her kitty -- she has 'Joker' with Akshay Kumar, 'Race 2' and a film with Kamaal Hassan, but she too wants to work Ranveer.

'We do want to work together. We talked about it, but he is very busy with his project at the moment and my line up of films are also sorted. So we don't have the opportunity now. It will take at least another year before we can work together,' said the actress.

At the moment, Ranveer is busy with Yash Raj Films production 'Ladies V/S Ricky Bahl', being directed by Maneesh Sharma.