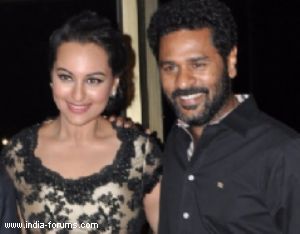 Sonakshi Sinha and Prabhu Deva will be seen dancing to the tunes of "Go Go Govinda" for Akshay Kumar's home production, "Oh, My God!!" directed by Umesh Shukla. The two are making a special appearance for the song but are not a part of the film, Akshay clarified

"Sonakshi and Prabhu sir are not in 'Oh, My God!!'. They are doing a short cameo role in the film," he said at the DVD launch of his previous film "Rowdy Rathore" held here Saturday.

There were also speculation about Sonakshi hurting herself during the shoot. The actress, who was also present at the event, clarified that it was just a minor "neck sprain" and she is fine now.

Directed by Prabhu Deva, "Rowdy Rathore" was well-liked and managed to cross the Rs.100 crore limit as well.

Talking about his director, Akshay said that Prabhu Deva is a very shy person and doesn't say much.

"He gets angry if someone does not give a good shot or doesn't do his work properly. He is very shy otherwise and does not talk too much," he said.

The actor marked his re-entry into the genre of action with "Rowdy Rathore" and plans to do more action films from now on.

"I enjoy action and I will continue to do it," he said.

Remakes of south Indian films seems to have become the trend in the industry now. Akshay calls them a "tried and tested" path to success and says that he doesn't feel there is anything wrong with it.

"They take our films, we take theirs. Its like a give and take relationship," the actor said.

Gautam Gulati Was Supposed To Join 'Bigg Boss 14' With Hina, ...
2 minutes ago