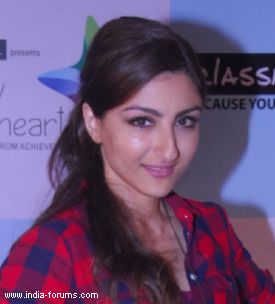 Actress Soha Ali Khan will be seen as a cop, complete with a khaki uniform, in the opening sequence of her upcoming movie "Mr. Joe B Carvalho". She loved the experience.

As Shantipriya Phadnis, she will be seen beating upto 20 goons in her entry scene.

"I'm very excited to play a cop for the first time. I loved wearing the police uniform and beating up gundas (goons)," Soha said in a statement.

Explaining the scene, she said: The film's opening scene has me arriving in the jeep and beating up 20 muscular men, that's what motivated me to do this film. You won't see me in a normal costume in this film."

Soha has donned several avatars for the film.

"I either sport the attire of a cabaret dancer, a fairy suit or a bikini; it was exciting for me to play these different roles instead of playing a single role as the girl next door," she added.

Saying Goodbye To 'Keeping Up With the Kardarshians' - ...
47 minutes ago