Smriti Irani, the Iconic Bahu of Television finally breaks her silence on the recent potshots taken at her that her return as Tulsi in Kyunki Saas Bhi Kabhi Bahu Thi had brought down the TRPs. “Can’t you see that this story has been planted?”, she asks. 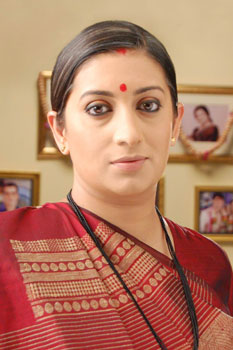 Featured Video
Smriti goes on, “I have been maintaining a low profile ever since I have made my comeback as Tulsi. I have just been focusing on my work and have no time for anything else. But to tell you honestly, I have now learned to take everything that comes by with a pinch of salt”. Addressing the TRP issue, the actress quips, “Kyunki maintained high TRPs even when IPL was in full swing. So do I need to say anything more?”

“I was ready for this backlash ever since I returned. But I did not expect it to come so early”, says the actress with a smile on her face. Adding on, she says, “I always have a ‘Not Accessible’ tag to people I do not want to talk to. But, I just want to tell them that I got back ‘due to Public Demand’. I will always be associated with my fans and continue to give my best”.

Moving on, when asked about her upcoming serial ‘Waaris’ on Zee, Smriti quickly asks us, “Have you seen the promos? How are they?”. Ask her whether the concept is similar to ‘Godfather’ or a ‘Sarkar’, Smriti says, “Just wait and watch!!”. Talking about her huge star-cast for the serial, a very upbeat Smriti quotes, “It is great to cast big names like Ashish Vidyarthi and Iqbal Khan and the latter will be seen in a never-seen-before character in Waaris. So better watch out!!".

Lastly, when we asked her about the buzz doing rounds lately about the wrap-up of her 9X show, ‘Mere Apne’, Smriti gets very diplomatic as she says, “You need to ask the channel for an answer here”. Before signing off, Smriti adds in, “Mere Apne has made me and the channel proud. When the channel 9X was launched, Mere Apne gave it name and got very popular. I am glad that the viewers have appreciated my serial”.

14 years ago thanx for the article. They seem so much in luv.. happy for them :D
and wats annoying abt the bachans? :S
i think abhi-ash make a gr8 pair.

+ 2
14 years ago umm sorry but u guys need to relax too....this article is seen after a long time and i enjoy their pair so stop reading their articles if you dont want to! n this is abt jodha akbar which involves hrithik as well!
So chill guys!

+ 2
14 years ago please you both get over it.... OMG cant wait when al the bachans wil be off our television screens..... its annoting now

+ 3
14 years ago Go Smirti! Can't wait for the Mirchi man's comeback... the promos are chilling~

14 years ago mere apne is definitely a good show... hope it doesnt end so soon

14 years ago as every one said, the trps are dipping because of the track..!! not smriti