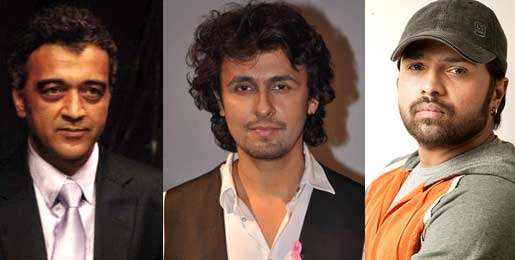 After hitting the right notes with audiences, Bollywood singers like Sonu Nigam, Lucky Ali and Himesh Reshammiya decided to give a new direction to their careers by taking the plunge into acting. Though most of them got their fingers burnt, names like Shekhar Ravjiani and Zubeen Garg are now looking at exploring the world of lights, camera and action.

The latest one to join the league is Shekhar of popular composer duo Vishal-Shekhar. While Vishal Dadlani did a "bizarre" cameo in Farah Khan-directed "Happy New Year" (2014), Shekhar will make his acting debut in "Neerja", a biopic on Neerja Bhanot, a flight attendant who sacrificed her life to save a group of American children aboard a Pan Am plane that had been hijacked on the ground at Karachi.

He will reportedly play the on-screen love interest of Bhanot, essayed by Sonam Kapoor.

Taking a step ahead, "Ya Ali" fame Assamese singer Zubeen Garg will start shooting for his Bollywood directorial titled "Chakra" from next year. The singer, currently tied up with Assamese film "Mission China", will also display his acting skills in the Hindi film.

"From January 2016, I will make a Hindi film called 'Chakra'. It's a political thriller. It's a dark kind of film...about humanity and politics. Now, I've my own production house; so I will make three to four films in a row," Zubeen had earlier told IANS.

If head-turning Pakistani singer Atif Aslam, who has lent his soulful voice to Bollywood stars like Akshay Kumar, Saif Ali Khan and Ranbir Kapoor, finds the right script, he will also make his appearance in Hindi movies.

"I might act in a Bollywood film. I'm listening to quite a few scripts now, but nothing has intrigued me so far. Let's see... I probably could do anything other than chocolate boy kind of roles," said Atif, who acted in Pakistani drama movie "Bol" (2011).

"Crazy kiya re" hitmaker Sunidhi Chauhan has "the acting bug" too!

"As far as acting is concerned, I was offered a few roles, but I was not ready at that time. Also, I was asked to portray the life of a singer on screen, but I never wanted to do such type of roles because I'm already a singer. I have the acting bug in my genes because of my father. I want to do roles of normal people," she said.

While they are yet to make a splash in the acting world, here are some of the singers who've been there and done that:

* Monali Thakur: The former "Indian Idol" contestant, who has given hits like "Sawar loon" and "Zara zara touch me", made her Bollywood acting debut with Nagesh Kukunoor's award-winning film "Lakshmi". At the Washington DC South Asian Film Festival, she bagged the best actress award for playing a child prostitute in the film. After doing a cameo role in Aamir Khan-starrer "PK", she will be next seen in Abbas Tyrewala's directorial "Mango".

* Yo Yo Honey Singh: He joined the acting wagon with the 2014 musical-thriller "The Xpose", which also starred Reshammiya. The rapper-composer had shared that "acting is the most difficult one among all the performing arts". The movie got mixed reactions from critics and masses.

* Ali Zafar: The singer from across the border began his successful Bollywood acting career with "Tere Bin Laden" in 2010. The Pakistani talent went on to feature in Yash Raj Films' "Mere Brother Ki Dulhan" and "Kill Dil".

* Lucky Ali: Despite winning accolades for his performance in movies like "Sur: The Melody of Life" and "Kaante", the "Ek pal ka jeena" hitmaker isn't too keen on coming back to the big screen. "There is nothing exciting to me as far as movies are concerned," said the son of late actor-filmmaker Mehmood.

+ 3
7 years ago Love you Sonu Nigam! you have an amazing Voice! you are just unbeatable