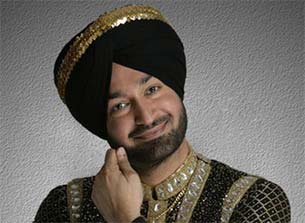 He had the listeners grooving to his songs in the 1990s, but Britain-based Punjabi singer Malkit Singh is saddened by the current state of the music industry in India. He feels that artists have the power to drive youth, but they are no longer offering anything meaningful to youngsters.

"It's a very sad thing. If we talk about youngsters, they will only listen to what we give them. They are not fools that they will hear mindless things. They like those songs because the artists are not getting anything meaningful," Singh told IANS in an interview.

"I feel that an artist has the power to drive the youth. But, if the same artist is not producing anything meaningful and is just concentrating on mixing etc., how is the youth going to accept meaningful songs?" he added.

The 51-year-old feels that it's also because Bollywood is only producing western songs. Because of that, youngsters have limited options.

"My last song 'Maa de hathan diyan pakkiyan rotiyan' made youngsters cry. These songs are attached to our roots and culture and the youth also like them. But we have stopped making such songs. The main problem is because of Bollywood; whatever they are giving, the listeners are accepting.

"Even if they don't like it, they really don't have an option as that is what keeps on playing throughout the day on radio. If meaningful songs are not played, how will the youth accept it?" he said.

"I have performed in over 54 countries and I still use traditional instruments when on stage. We wear traditional clothes and perform in the same way, because that is the part of India which is admired all around the world. So, I feel we should never forget our roots and culture," he said.

"For example, if a British guy comes here, and if he listens to the same kind of songs that he listens in his country, then how is our country different from theirs. They don't want to listen to fast track songs when they are here, but the traditional songs of the country," he added.

The singer moved to Britain in 1984. He holds a Guinness World Record for the biggest selling bhangra artist of all time. In 2008, he was appointed a Member of the British Empire (MBE) for services to Punjabi music. He was the first Punjabi artist to get the honour. In 2012, he was honoured with a star on the Birmingham Walk of Stars.

"The thought behind the album was to keep the lyrics simple so that it can touch people of all age groups. 'Sikh Hon Da Maan' (Proud to be a Sikh) includes 10 religious tracks, including a shabad. All the songs talk about values, principles and lessons taught by the Sikh religion to help people lead a meaningful life," said the "Tootak tootak tutiyaan" singer.