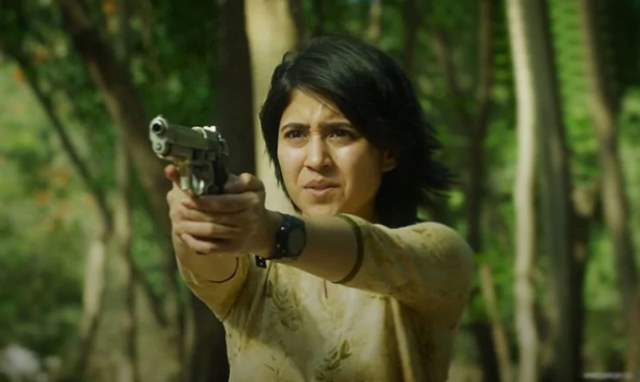 Shweta Tripathi has broken her girl-next-door image with her phenomenal performance in Mirzapur. The actress is known to have performed in some of the most critically acclaimed dramas that hold their relevance even today. However, her character Golu Gupta tops the list when it comes to being admired by the audience.

While Mirzapur’s season 2 is about to be released shortly, fans are excited to see Golu Gupta in an all-new avatar. The season 2 trailers and character promos give a sneak peek into Shweta’s character who will be seen holding a real gun. Speaking about the same, Shweta Tripathi opened up about her experience using real guns in the second season.

Talking about her training for the upcoming season she said, “The training was definitely physical and also mental because it obviously minds over matter. and doing the action is exciting because as an actor you are trying different things and exploring new places and emotions like my other characters but the training was a challenge I started my physical training way before because I wanted to look like a girl who can pick up a gun.”

Shweta has carved a niche for herself through several projects which include Mirzapur, Masaan, Gone Kesh, Haraamkhor, and many more. The 35-year-old actress also admitted that she loves breaking stereotypes.

Generally, when people think about the action they think of someone who is tall strong freeing and slender body but I am with nothing and I love breaking stereotypes and I really enjoy doing that and I wanted to train well I wanted that when there's a gun in my hand then people should believe that they should have no doubt about me and my character. These are real guns we used in Mirzapur none of them are fake so there was training.

In a career span of 10-years, Tripathi has created a niche for herself in the industry with her projects including - Mirzapur, Masaan, Gone Kesh, Haraamkhor, and many more.

Meanwhile, fans are excited about the much-awaited release of Mirzapur’s season 2. The makers have released dialogue promos back to back keeping the audience guessing on what path will the upcoming season take.

If Masaan was popular, audience would have loved ‘Shalu Gupta’: Shweta ...