Speak of twists and turns added with a flavor of mystery and Ratna Sinha's Babul Ka Aangann Chootey Naa on Sony is sure to out beat many other serials, whether it be in the mystery of the haveli in Rajasthan, or the brutal rape of Shilpa or the shocking arrest of Shubh for the said crime!! 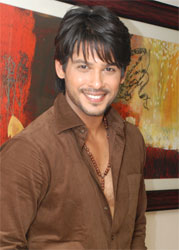 Well, if this was not enough, Shubh(Siddharth Shukla) is all set to land into bigger trouble as he escapes from jail to prove his innocence...


“Shubh escapes from jail and tries to meet Shilpa to know more about the culprit, but it so happens that at the same time, a mystery man tries to kill Shilpa by pushing her off the building. And yet again, the blame for attempt to murder falls on Shubh", says our khabroo.

Shilpa certainly has seen the culprit who raped her, but is out of her senses at the moment. “Her mental condition worsens after the fall and is hospitalized. But as the track progresses, Shubh will succeed in bringing her back to normalcy”, reveals our source.

Also, as the story moves, few indications to Rana being the culprit is shown to the viewers. “The prime suspect is shown to be Rana(Abhinav Shukla), but there is a stalker too whose face is not revealed yet”, concludes the source.

Well, for more of suspense and drama, stay glued to Babul...

Justnandi 5 years ago Siddharth Shukla , you are an very nice actor.

NatalyMusketeer 5 years ago Waiting for some new show with you Siddharth Shukla in a lead role...

goofyCat 5 years ago Want to see you in a new show soon, Siddharth Shukla..

Justnandi 5 years ago Siddharth Shukla, you are an awesome actor. Want to see you in a negative role too.

Justnandi 5 years ago Siddharth Shukla, you are awesome always .Love you a lot.

SidkiDiwani 7 years ago I hated this track...why show Siddharth Shukla as a rapist of all things...

IBserenity 12 years ago are Abhinav Shukla and Siddharth Shukla related?
Also who is Rana? THat guy who's eye was broken? Didn't he run away or something?