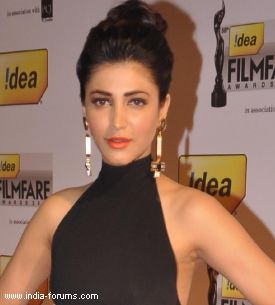 Actress Shruti Haasan, who was hailed for her brief role in Nikhil Advani's "D-Day", said she is disassociating herself from the Tamil-dubbed "Dawood" version as it is being released without her consent.

"This is to inform you all that I am disassociating myself from the release of 'D-Day' in Tamil called 'Dawood' as it is being done without my consent or approval and is a clear breach of contract," Shruti, who essayed the role of a prostitute in the film, said in a statement.

"In fact, we will be taking a legal action on this issue. As soon as the paperwork is done, I will release the details to the press for further clarification," she further added.

Action spy-thriller "D-Day", which also featured Arjun Rampal, Irrfan Khan and Huma Qureshi in key roles, is a fictional story about the hunt for Dawood Ibrahim, played by Rishi Kapoor in the film.