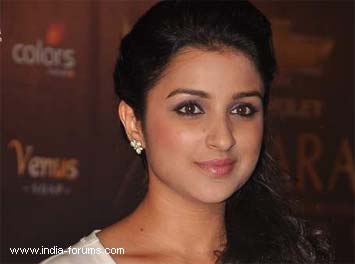 Actor Shreyas Talpade is so impressed with Parineeti Chopra after watching her in the song "Pareshan" from "Ishaqzaade" that he feels the youngster will give everyone a run for their money.

"Saw 'Pareshan' from 'Ishaqzaade' ... I am in love with Parineeti Chopra ... one talented actress who's gonna give everyone a run for their money," the 36-year-old tweeted.

Yash Raj Films' (YRF) "Ishaqzaade", which also marks the debut of filmmaker Boney Kapoor's son Arjun, will release May 11. The film tells the story of two fiery characters and their fight for power and supremacy.

Actress Divya Dutta is all praise for Pramod Joshi's "Chhodo Kal Ki Baatein" and says that this is the one movie people should go and watch.

The film tells the tale of a successful IT professional, played by Sachin Khedekar. He comes across a blind man, played by Anupam Kher, who makes him understand the importance of life.

"Anupam Kher and Sachin Khedekar are a treat to watch in 'Chhodo Kal Ki Baatein'. What an inspiring film! especially in today's times when we have no Time to stand and stare," the 34-year-old tweeted.

The film is in Hindi and Marathi languages.

"Just keep aside two hours of your time and watch it! You will come back befriending yourself. I have to Thank AnupamPkher for this lovely film," she further tweeted.

I am enjoying working with new talent: Ritesh Sidhwani

Ritesh Sidhwani, who has produced hits like "Dil Chahta Hai", "Lakshya" and "Zindagi Na Milegi Dobara", says direction is not in his scheme of things and that right now he is enjoying working with new talent.

"Will wear the director's hat when I have something to say and share, in the meanwhile I am enjoying working with all the new talent out there," Sidhwani tweeted.

Sidwani worked with some of the new faces including Reema Kagti in "Honeymoon Travels Pvt. Ltd", Vijay Lalwani in "Karthik Calling Karthik" and Abhinay Deo in "Game".

"Nurturing them and giving them a platform to make their films," he further tweeted.

His next project is Reema Kagti's "Talaash" that has Aamir in the lead role.