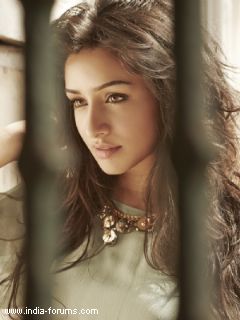 There is no doubt that the soundtrack of 'Ek Villain' is among the years most eagerly awaited.

After all Mohit Suri's previous films 'Zeher', 'Woh Lamhe', 'Awarapan', 'Murder 2', 'Raaz 2- The Mystery begins' and 'Aashiqui 2' have all been musical hits and what Balaji and Suri come up with next, in their maiden outing together, is the subject of much excitement.

While the soundtrack of 'Ek Villain' is due to release shortly, word has it that Shraddha Kapoor has turned singer for her director. Shraddha is the daughter of Shivangi Kolhapure, who is Lata Mangeshkar's niece.

The track titled 'Galliyan' is a duet with composer-singer Ankit Tiwari, who shot to fame with 'Sunn Raha Hai Na Tu' ('Aashiqui 2'.)

The original 'Galliyan', a solo rendition by Ankit Tiwari, will be the first track from the film to be unveiled soon.